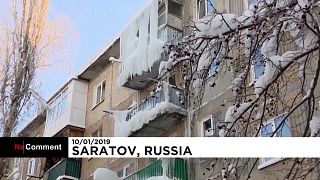 Residents living in an apartment block in the Russian city of Saratov have warned the cold weather may lead to dangerous accidents if authorities do not intervene.

They have been taking photos of icicles, which have formed on their apartments, and posted them on social media in order to raise awareness of the problem.

Those living in Moscow have complained of similar problems.