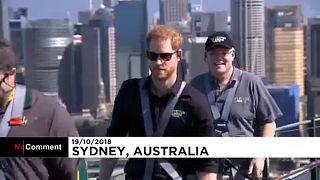 Harry and his wife Meghan, the Duchess of Sussex, are on day four of a 16-day tour of Australia, Fiji, Tonga, and New Zealand.

The main focus of the tour is the Invictus Games, which start in Sydney on Saturday.

The sporting event, founded by Harry in 2014, gives sick and injured military personnel and veterans the opportunity to compete in sports such as wheelchair basketball.