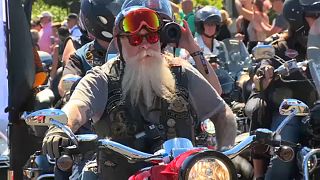 Tens of thousands of "hogs" roared into Prague as Harley-Davidson enthusiasts from around the world converged on the Czech capital to honour the storied motorcycle maker's 115th anniversary.

Prague, home to a 90-year-old Harley-Davidson club, the oldest in the world, is hosting the biggest anniversary bash for the motorcycles outside of their U.S. home of Milwaukee, Wisconsin, where a similar party starts at the end of August.

More than 60,000 bikers and about 40,000 other visitors from over 70 countries convened in Prague, in the heart of central Europe, organizers estimated.