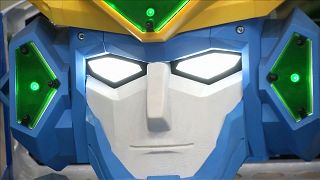 Japanese engineers unveiled on Wednesday a robot that transforms into a car that can actually carry people on board, in what they said was the first-ever such accomplishment in the history of robots.

The 3.7-metre-tall (12.1-feet) two-seater robot "J-deite RIDE" can transform into a sports car in a process that takes about a minute. It can technically walk at a speed of 100 metres per hour (0.06 mph) or run on its four wheels but developers said they've never really tested it outside the factory cargo bay area.

CEO of Brave Robotics, Kenji Ishida, who initiated the co-project with Asratec, an affiliate of the Japanese mobile phone giant SoftBank, and a roller coaster manufacturer Sansei Technologies, said he was motivated by his childhood transformer heroes in anime movies.

While admitting that it may seem like an expensive toy, Ishida said the robot is an attempt to inspire others and broaden the human imagination. Developers said they will begin with showcasing the technology in the entertainment industry, such as amusement parks and street parades.