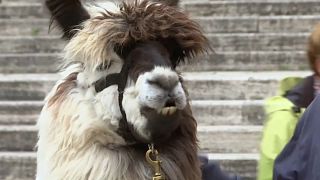 The llamas from the South Tyrol region walked with their owners some 1,070 kilometres (664 miles) from the mountains in the north of Italy to see Francis at the Vatican.

Francis walked up to the llamas and greeting their owners.

The group gave Francis a pair of socks and a white papal skull cap made of llama wool.