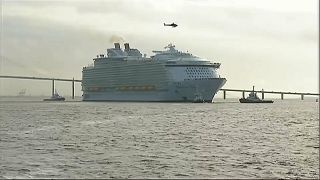 The world's biggest cruise liner, the Symphony of the Seas, was handed over by French shipbuilder STX to the US giant Royal Caribbean International ahead of her maiden voyage in the Mediterranean.

This makes the behemoth marginally bigger than its sister ship, the Harmony of the Seas, which STX France delivered to Royal Caribbean in 2016.