The latest mapping results from NASA’s satellites have shown a striking rise in the levels of carbon dioxide in the atmosphere, amounting to the largest increase in at least 2,000 years.

Heat and dryness caused by El Niño (unusually warm ocean temperatures) have particularly impacted forest areas in South America, Africa and Asia. This is behind the spike in carbon dioxide levels, according to the NASA study.

“These three tropical regions released 2.5 gigatons more carbon into the atmosphere than they did in 2011,” said Junjie Liu of NASA’s Jet Propulsion Laboratory (JPL) in Pasadena, California, who is the lead author of the study. A gigaton is a billion tons.

The research shows how little carbon dioxide is being absorbed by Earth’s main tropical forests.

With the increase in temperature, vegetation tends to dry out. As plants and trees rot, they produce more CO2 rather than absorbing it as a healthy plant would during photosynthesis.

So, as the world gets warmer, fewer plants are able to filter out the greenhouse gasses that, in turn, increase global temperatures. It’s a vicious cycle and human activity such as deforestation is adding to the problem.

The Amazon rainforest has suffered its driest year in the past 30 years.

Data collected from both space and the ground has shown plants in Africa are decomposing faster due to hot weather.

Asia has also experienced the second-driest year in the past 30 years. Particularly in Indonesia, forest fires (some of which are intentionally set by humans) have caused an increase in carbon dioxide levels.

Levels of CO2 in Earth’s atmosphere are constantly changing, from season to season, as vegetation grows and dies. From summer to winter, the amount of CO2 in the atmosphere naturally rises. But it is the increase in the annual average of carbon dioxide concentration that causes concern.

NASA warns that since the early 1800s, which marks the beginning of the Industrial Revolution, carbon dioxide levels have increased. Before then, the Earth’s atmosphere contained approximately 595 gigatons of carbon in the form of carbon dioxide. Currently, that number has reached 850 gigatons. 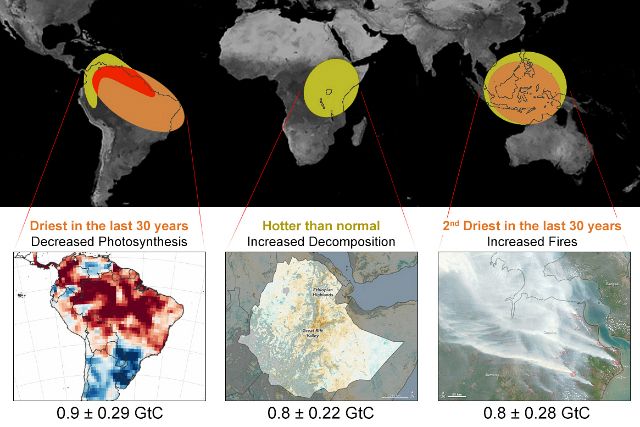