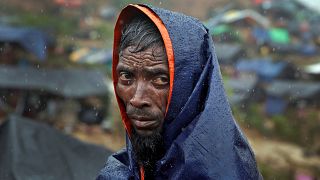 The UN says around 409,000 Rohingya Muslims have fled violence in Myanmar and are now in neighbouring Bangladesh, living in camps under dire conditions.

Ethnic Rohingya have long faced discrimination in Myanmar and are denied citizenship, even though many families have lived there for generations.

The UN has described the violence against the Rohingya in Myanmar as ethnic cleansing – a term that describes an organised effort to rid an area of an ethnic group by displacement, deportation or killing.