Fears the US will withdraw its security umbrella from Europe could push countries to develop their own nuclear weapons, according to a group that monitors global arsenals.

France and the United Kingdom are the European Union’s only nuclear powers, both having fewer than 5% of the number of warheads held by the US and Russia.

But experts say that could change amid Donald Trump’s threats to reduce the US’s commitment to NATO.

President Trump thinks the U.S. pays too much to guarantee European countries’ security and has urged NATO members to spend more on defence. 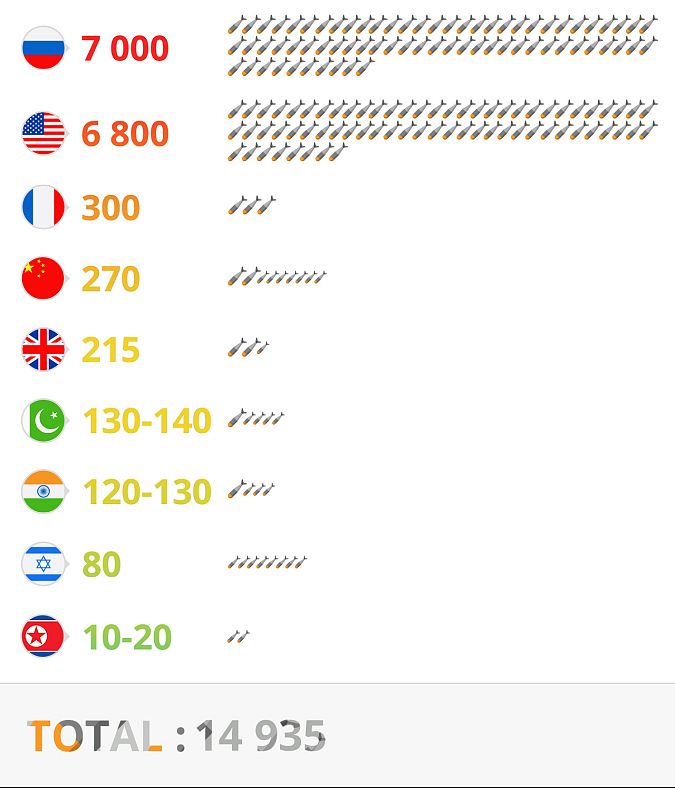 “Trump’s statements and general style so far appear to have increased concern in Europe and Asia about US security commitments, including providing a nuclear umbrella,” Hans Kristensen, associate senior fellow at the Stockholm International Peace Research Institute (SIPRI) told Euronews.

“If those concerns continue and deepen, they could potentially cause some of those countries to reevaluate whether they need to develop nuclear weapons for their own security.”

The latest statistics on the nuclear weapons reveal the US and Russia both have around 7,000 warheads each.

The pair, which own 93 percent of the world’s nuclear weapons, are on track to meet a 2018 deadline to reduce their stockpiles.

While France and the UK have maintained or reduced their capabilities, three Asian countries – India, Pakistan and North Korea – have upped theirs.

SIPRI says while overall the number of warheads is on a downward trend, all nine nuclear powers are modernising their arsenals.

It says the U.S. plans to spend $400 billion (349 billion euros) over the next decade to maintain and upgrade its nuclear forces.

“The projected increases in U.S. spending are not unexpected,” added Kristensen. “The current U.S. administration is continuing the ambitious nuclear modernisation plans set out by President Barack Obama.”

Trump has said the U.S. must strengthen and expand its nuclear capacity “until such time as the world comes to its senses regarding nukes”.

“Although Trump can’t directly affect other countries’ nuclear arsenals, his policies can certainly influence how they view the need for nuclear weapons,” said Kristensen.

“An increase or significant improvement of the US nuclear arsenal is likely to help fuel modernization plans in other countries.

“That’s not to say they wouldn’t modernise their forces if the United States didn’t, but US improvements can drive requirements in those countries to compensate or match the US capabilities.”