The sun shines in Denmark an average of 1,540 hours a year, which means one-fifth of 365 days. In contrast, some cities in Southern Europe such as Lisbon, Madrid and Marseille can vary between 2,700 and 2,900 sunny hours annually.

Although solar availability would appear to be scarce in this Nordic country of 5.6 million, the country has become a leader in combined heat and electric generation – all-in-one, in the same power plant.

Springtime in Denmark does not mean brighter days, as temperatures are still quite chilly, often under 10ºC. Northern Europe is used to facing the challenge of meeting large demand for heating with sustainable power generation.

The small town Brønderslev and its 36,000 residents in the province of Nordjylland, northern Denmark, is going through a unique power experiment: since the end of 2016, it is being heated by a solar plant of almost 27,000 square meters of panels, the size of three soccer fields. Around 1,500 households are already being heated with clean energy. 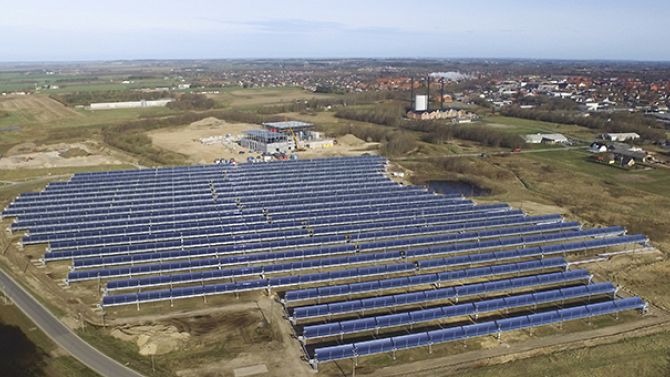 The technology is called Concentrated Solar Power (CSP). It uses lenses and mirrors instead of photovoltaic panels. The solar plant in Brønderslev has 40 rows of 125 meters U-shaped mirrors. These mirrors collect the sun’s rays and reflect them onto a receiver pipe, inside which runs hot oil (heated by the sun) with temperatures over 300°C.

This system has been developed by the Danish energy company Aalborg CSP. For now, it supplies 16.6 MW to the heating network. This is the first phase of the project. When the electric turbine that is now under construction starts operating by next spring, the plant will also contribute to electric production.

Added to this, according to the company, later this year the solar system will receive an input from a biomass plant. Almost 15% of all power in Denmark, says its Energy Ministry, is generated from biomass (straw and biodegradable waste) together with what is called combined heat and power plants. More than 80% of Danish districts’ heating is co-generated with electricity. There are 670 decentralized plants of that kind around the country.

The future of clean power

The combination of heat and power generation using the CSP solar technology will be the basis for future clean energy generation, the company’s CEO Svante Bundgaard believes. This mixed solution, solar-plus-biomass and heating-plus-electricity, is the first experiment in the world that seeks to prove how an integrated energy system can heat and power even in areas with less sunshine.

The CSP technology has traditionally been placed in heavier solar regions, like Spain, the USA, South Africa and Morocco.

For Bundgaard, the mixed system can be a model for other European countries like Germany, Poland, Finland, Scandinavia and the UK. All these countries share huge heating requirements for households during the winter. “You can get a feasible project in the northern part of Europe by having both heating and electricity,” said the CEO.

“Our version of a CSP plant combining power and heating provides a unique opportunity to have a customized system which exactly fits the size of cities. With this scalable solar solution for combined heat and power, you can actually make competitive solar energy in Northern Europe. This is what is unique about this project,” he suggests.

One advantage of the CSP technology is that the energy harnessed from the Sun can be stored and produced at night. “It gets more attractive and competitive without any government subsidies,” insists Bundgaard. “It is an interesting future for solar to be a dominant resource for our global energy market for the coming years.”