An international court has ruled against Beijing over its territorial claims in the disputed South China Sea. China, however, has said it will not accept the decision.

The Permanent Court of Arbitration supported the case brought by the Philippines, saying there was no evidence China had exercised exclusive control over the waters or resources in the past.

“There was no legal basis for China to claim historic rights to resources within the sea areas falling within the ‘nine-dash line’,” the court said. The line referred to is a demarcation line on a 1947 map of the sea.
It is rich in energy, minerals and fishing resources. 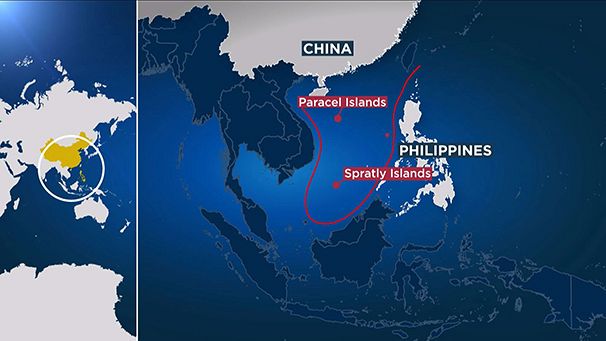 Judges ruled the plaintiff’s sovereign rights had been breached. The 497-page ruling found that Chinese law enforcement patrols had risked colliding with Philippine fishing boats in parts of the sea. It also said China’s construction work had caused irreparable damage to coral reefs.

China, which said it wouldn’t accept any ruling from the Hague court, has labelled the outcome “ill-founded.”

President Xi Jinping said China was dedicated to maintaining peace and stability in the South China Sea, but refused to “accept any positions or actions based on the outcome of the arbitration case over the dispute.”

Reaction from the Philippines

Perfecto Yasay, the Philippines’ Foreign Minister, has called for “restraint and sobriety” in the region.

“Our experts are studying this award with the care and thoroughness that this significant arbitral outcome deserves,” Yasay said at a news conference following the ruling.

“We call on those concerned to exercise restraint and sobriety. The Philippines strongly affirms its respect for this milestone decision.”

Reaction from the United Nations

A spokesman for the United Nations called for disputes in the expanse to be resolved in a “peaceful and amicable manner, through dialogue and in conformity with international law.”

The organisation said it is “important to avoid actions that would provoke or exacerbate” tensions in the expanse of sea.

Reaction from the United States

The United States also warned against provocative statements or actions that might escalate the situation.

It labelled the ruling from The Hague final and binding.