Portugal progressed to the quarter-finals of Euro 2016 on Saturday evening after beating Croatia 1-0 in extra time in their last 16 tie.

In a dire match in Lens, Portugal needed 117 minutes to finally break the deadlock and give their fans something to cheer about.

Second half sub Ricardo Quaresma headed into an empty net after Cristiano Ronaldo’s first shot was saved by Daniel Subasic.

Historic match, but not in a good way

For a match littered with world class, talented individuals it turned out to be a drab affair all around.

It was evenly balanced, but scrappy and dull with neither side appearing seriously capable of threatening the other’s goal.

Over the first 90 minutes Cristiano Ronaldo was almost non-existent and Nani, who was playing his 100th game for Portugal, was erratic.

Portugal enjoyed a large part of possession late in the second half but they created few chances of note.

Croatia weathered that storm and the game returned to a display of missed passes and wayward shots.

Extra-time was written all over the match, but very few watching wanted this flat encounter to go on for another 30 minutes.

In a bid to grab a late, late winner the coaches from both sides made attacking changes. Forward Ricardo Quaresma was brought on for midfielder Joao Mario Portugal on the 86 minute while seconds later a fatigued-looking Mario Mandzukic was replaced by Nikola Kalinic for Croatia.

The changes didn’t work and Spanish referee Carlos Velasco Carballo had had enough and blew for full time and, agonizingly, an extra 30 minutes.

It was the first match in the history of the European championships that not a single shot on goal was registered in regulation time.

That poor form in front of goal was extended for another 15 minutes as neither side managed to test their opponent’s number one in the first half of extra time.

Just as penalties were looking the likeliest way of deciding the winners Portugal finally made the break through and it came after 117 minutes of play.

After Croatia hit the post through an Ivan Peresic header it bounced back kindly to Portugal, who immediately went on the break.

Renato Sanches sent Nani off on the left, the former Manchester United winger then played Ronaldo through in the area at the far post.

The Portugal captain’s shot was parried by Subasic into the path of Quaresma, who made no mistake from a few yards out and headed in to send Portugal through and their fans into wild delirium.

The win has set Portugal up with a quarter-final fixture with Poland on 30 June in Marseille.

First to qualify for last eight

Earlier in the day Poland became the first team to qualify for the quarter-finals, beating Switzerland in a penalty shoot-out in St Etienne.

After a goalless extra time Poland sealed the win 5-4 on penalties.

The match marked unchartered territory for both Switzerland and Poland, who were playing in the knockout stage of a European Championship finals for the first time.

Poland had never even won a game at the tournament before arriving in France, but it was Adam Nawałka’s men who made the break through first six minutes from the break.

Kamil Grosicki motored down the left flank before playing the ball across the box to Arkadiusz Milik. The Ajax man then dummied brilliantly to leave Blaszczykowski free to nutmeg an advancing Yann Sommer from 10 yards out and celebrate his second goal of the tournament.

The second half turned into an entertaining encounter with decent chances for both sides.

Robert Lewandowski almost caught Sommer out with a toe-poke from just inside the area while Blaszczykowski also called the Swiss shotstopper into action with a rasping effort.

At the other end Ricardo Rodríguez sent a delight free kick curling towards the top right corner only for Lukasz Fabianski to produce an equally stunning save to tip over the bar.

Haris Seferovic rattled the crossbar with a thunderous strike with just under 15 minutes left as Switzerland piled on the pressure looking for the equalizer.

The pressure paid off and the equalizer came with eight minutes remaining.

Xherdan Shaqiri produced arguably the goal of the tournament so far.

The Stoke City midfielder unleashed a stunning scissor-kick in from 18 yards out that went over his shoulder and into the bottom right corner past a diving Fabianski.

Neither side could find the winner in regulation time as referee Mark Clattenburg blew his whistle to signal another 30 minutes of play.

As the clock wore down so did the pace and quality of play as both side’s appeared to be suffering. A couple of very good chances for bothe sides to win it came and went as penalties started to loom large.

The mass gathering around the centre circle ready for the decisive spots kicks eventually materialized as neither side could find the winner in extra time.

Granit Xhaka was the only one to miss his penalty from the ten players that walked into the area with ball in hand.

Own goal puts Wales through

Wales continued their dream and historic run at Euro 2016 by qualifying for the quarter finals.

The only goal of the match came on 75 minutes through an own goal by Gareth McAuley.

The clash was the first time the two home nations have met in the knockout stages of a major tournament.

It was also the first time either nation had made it to the knockout rounds of a major tournament since the 1958 World Cup.

Although the first half was a little scruffy and lacking real quality both sides did have their chances, but couldn’t capitalize and get on the scoreboard.

Northern Ireland appeared the more dangerous, though, as Stuart Dallas had a fine effort palmed round the post by Wayne Hennessey while Jamie Ward also called the Wales keeper into action with a ferocious rising shot from 25 yards out that was tipped over.

Wales midfielder Aaron Ramsey, meanwhile, headed the ball past Michael McGovern and into the net only to be called for a clear offside.

Despite Wales having the lion’s share of the early possession, but both teams looked more comfortable and dangerous when on the break.

Northern Ireland would have been the happier with their performance as the sides walked back down the tunnel for half-time, but it was far from an entertaining match-up for the neutrals.

Gareth Bale came close to a third goal from a free kick this edition just before the hour mark but a diving Michael McGovern – man of the match against Germany – was up to the task to keep the scoreline goalless.

On 75 minutes that was to change. McGovern was beaten, and beaten by one of his own men.

After being played through by Ramsey, Bale raced down the left and then blasted a devastating low ball across the face of goal. With second-half sub Hal Robson-Kanu breathing down his neck, an outstretched McAuley could only stab into his own net from close range.

It proved to be the only goal of the evening and as Northern Ireland pack their bags to go home, Wales can look forward to a last eight tie against either Hungary or Belgium, who play on Sunday.

Player of the day

Xherdan Shaqiri for his goal against Poland – the best of the tournament so far. 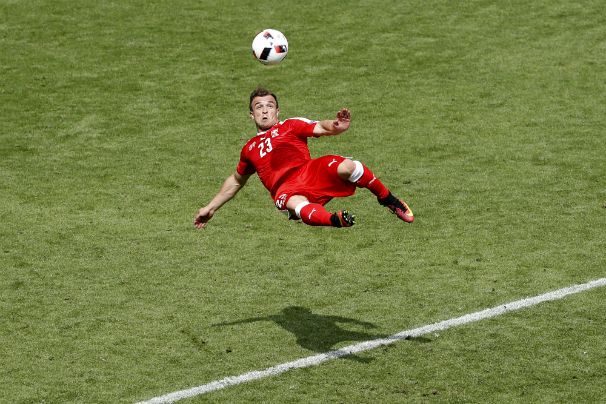 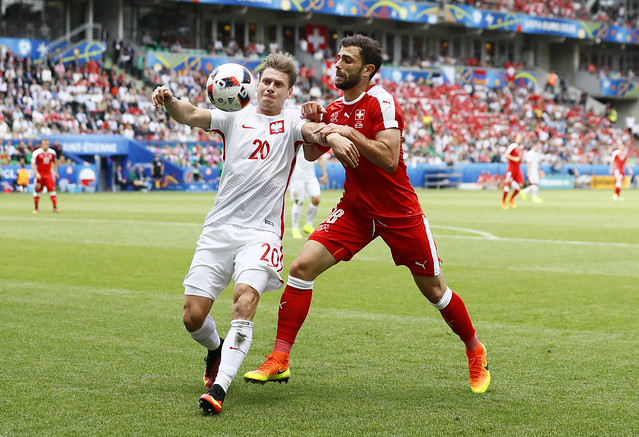