Switzerland beat competition debutants Albania 1-0 to get their Euro 2016 Group A campaign off to an unconvincing but winning start in Lens.

The game got off to an historic start as Swiss midfielder Granit Xhaka and elder sibling Taulant became the first brothers at a European Championship to play on opposing sides. 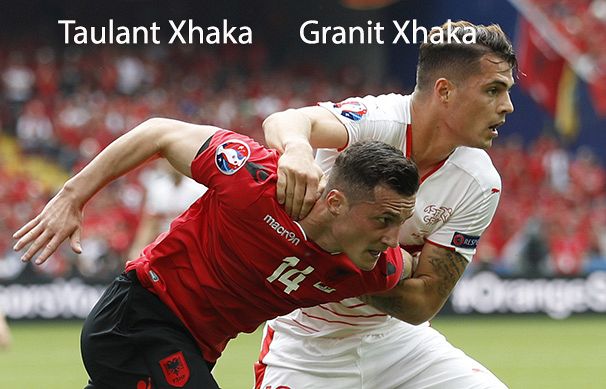 The Swiss were in front after just five minutes.

Fabian Schar made the most of a goalkeeping blunder by Etrit Berisha to nod home into an empty net following an excellent corner from Xherdan Shaqiri.

Shaqiri has now had a hand in nine goals from his last eight competitive games for Switzerland (4 goals, 5 assists).

Lorik Cana received a second yellow on 36 minutes for a handball just outside the box which sent the Albania skipper for an early shower and left his side at ten men.

Blerim Dzemaili nearly took advantage from the resulting free kick but his curling effort was met by the upright.

Albania had a few decent chances of their own but Swiss keeper Yann Sommer was alway up to the task to keep his team in front heading into the break.

Albania scored only seven goals in qualifying for the tournament in France and that poor form in front of goal was highlighted further in Lens – although they did remain a threat and kept Switzerland on their densive toes on occasion.

As the game reached the hour mark it had become more and more sloppy with a number of missed passes and wayward challenges from both sides.

Haris Seferović should have put Switzerland 2-0 up on 66 minutes when he was played through on goal with only Berisha to beat, but the Albania shot-stopper spread himself well to get his boot in the way.

That missed opportunity nearly came back to bite the Swiss ten minutes later when Elseid Hysaj squared his pass to Armando Sadiku at the right post but the Albania striker’s poorly executed shot fired into the side netting from eight yards out.

Albania had their best chance of the match to get on the scoreboard on 87 minutes when Shkëlzen Gashi caught the Swiss defence napping and found himself goal-bound with only Sommer in his way.

But Sommer was out quickly and superbly got a hand to the powerful shot, sending the ball over the crossbar.

It turned out to be a very underwhelming performance from Switzerland and an impressive one by Albania, but Vladimir Petković‘s men managed to hold on to take the win.

Wales began their first ever European Championship finals with a fine 2-1 victory over Slovakia in Group B of Euro 2016.

Slovakia’s Marek Hamsik rang the warning bells after just three minutes when he sliced his way through the Welsh defence and across keeper the Danny Ward only to see his shot towards an empty net cleared off the line by a backtracking Ben Davies (who lost the ball to Hamsik in the first place).

Napoli midfielder Hamsik was ruing that miss moments later when the most expensive player in the world fired Wales into the early lead.

Real Madrid star Bale sent the Welsh fans into wild jubilation in Bordeaux when on 10 minutes he blasted a 30-yard free-kick over the wall and past a confused Matus Kozacik.

In the ensuing 20 minutes became a rather scrappy affair.

Neil Taylor was lucky to escape a yellow card for a late lunge at Hamsik (not even a free kick was given), while Slovakia skipper Martin Skrtel was lucky not to be penalised with a red and a clear penalty for a deliberate elbow on Jonny Williams inside the box.

Wales were more in control of the first 45 minutes of play and despite Slovakia enjoying their best spell as the break approached they were unable to cause any serious problems for Ward, who had a wall of Red in front of him and little to do before walking back down the tunnel for half-time refreshments.

Wales started the second half the more composed out of the two and continued to pile the pressure on Slovakia.

But Slovakia had a fine chance to equalize 10 minutes after the restart when Robert Mak got in behind Ashley Williams only to drill his shot wide of goal.

It did give Wales a reminder though that the game was far from over and just a few minutes later Slovakia backed that reminder up with a fine goal to level the tie.

Just after the hour mark Mak made an excellent darting run into the box from the right and after shrugging off Aaron Ramsey he squared the ball to Duda, who fired low into the net past Ward.

Slovakia were finally now firing on all cylinders and Wales looked rattled as they were forced to fend off wave after wave of attack by Jan Kozak’s men.

But against the run of play Wales managed to pull the winner out of the bag on the 81st minute when substitute Hal Robson-Kanu scuffed the ball into the back of the net after a stumbling Ramsey had enough awareness to flick it on before hitting the deck at the edge of the box.

It was far from a clean goal but Chris Coleman and his men won’t care too much about that as they picked up a morale-boosting three points from their first ever game at a European Championship finals.

Russia come back in added time to draw with England

England let slip a 1-0 lead in stoppage time as they drew 1-1 with Russia in their pair’s Euro 2016 Group B opener.

In a drab encounter for the neutrals, England needed 73 minutes to break the deadlock through Eric Dier but England’s misery at major tournaments continued as Russia levelled through Vasili Berezutski in added time.

England dominated possession in the first half but were unable to break through the solid and player-packed Russian back line.

Some of England’s build-up play was finely crafted thanks to some darting runs by Raheem Sterling and Dele Alli, unfortunately for Roy Hodgson’s men their finishing couldn’t match it.

Rooney, who was slotted into midfield for the tie, proved to be England’s maestro, stitching the play together well throughout.

Russia did, however, remain dangerous in attack, but Leonid Slutsky’s men also couldn’t take advantage as it remained goalless at the half-time whistle.

England weathered a mild Russian storm at the beginning of the second half before once again taking control of the encounter, although the Three Lions’ intensity from the first half appeared to wane somewhat in the first 15 minutes after the re-start.

Hart was tested on 63 minutes when Oleg Shatov’s curling effort from 20 yards headed his way. The Manchester City shot-stopper was beaten, but the ball clipped the post and went out of play.

Soon after England were on the attack again and had a good chance to take the lead.

Danny Rose zipped down to the byline and sent the ball to the top of the area where Rooney was waiting to unleash a powerful shot towards goal, but keeper Igor Akinfeev brilliantly got down low to flick it onto the bar.

Adam Lallana was waiting for the rebound and drove it at the post but he was called offside.

England were not to wait long for the breakthrough they deserved.

Harry Kane acted as the decoy man as Eric Dier curled a delightful free-kick past Akinfeev on 73 minutes to finally break the deadlock, much to the delight of the thousand of England fans at the Stade Velodrome.

But the England fans were silenced one minute into stoppage time when Berezutski rose high to meet an inswinging cross and headed it over Joe Hart for the draw.

With all the violence in the streets of Marseille it has been quite a disappointing day for England both on and off the pitch.

World Champions Germany take to the Euro 2016 stage for the first time on Sunday when they face Ukraine at the Stade Pierre-Mauroy in Lille in Group C.

Germany coach Joachim Low is awaiting a late fitness test for influential defender Mats Hummels, who is recovering from a calf injury while Antonio Rudiger sustained a torn anterior cruciate ligament midweek and has been replaced by Jonathan Tah.

The three times champions were unconvincing in the build up to France and will not be taking Ukraine lightly.

Mykhaylo Fomenko’s men will look to spring a major surprise in the north of France and will be relying on their danger men Andriy Yarmolenko and Yevhen Konoplyanka to do most of the damage to the German back line.

Ealier in the day and also in Group C, Poland and Northern Ireland face off at the Allianz Riviera in Nice.

This is the third Euro finals Poland have featured in but they have yet to progress past the group stage and have yet to win a game.

They will be looking to turn the tides on that poor stat against Northern Ireland whose 30-year wait to reach a major finals is finally over.

Star striker Kyle Lafferty and co will be no push over on the south coast though and head into the game with a stunning 12 match unbeaten streak.

Turkey and Croatia kick-start proceedings in Group D when the pair lock horns at the Parc des Princes in Paris.

The omens aren’t good for Turkey for this one having lost all three of their previous opening games at European Championship finals.

Fatih Terim’s men are unbeaten in their last eight competitive games though and will provide a stiff challenge for Croatia who will be looking for revenge for the quarter-final at Euro 2008 which the Turks subsequently won on penalties. 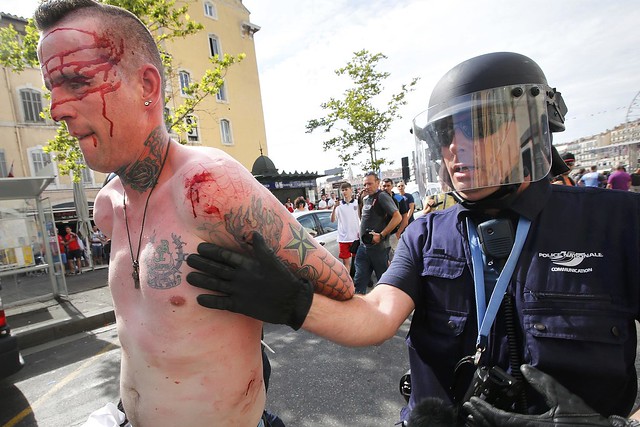