A collective sigh of relief

Despite being played at a frantic pace, the first half was bereft of real quality as a stubborn Romania kept the hosts at bay.

France had eight shots in the first 45 minutes – none of which were on target.

Romania had four shots with one heading goal-bound and giving the home side and their fans a real scare.

Nicolae Stanciu found himself free and unmarked at the back post following a corner kick but his shot from six yards out was superbly blocked by France goalkeeper Hugo Lloris.

Antoine Griezmann had a header bounce back off the the post, while Dimitri Payet proved a threat throughout, although France couldn’t capitalize.

Despite ‘Les Bleus’ having the lion’s share of possession the score was goalless at half time.

Romania got the second half off to a flier and almost went ahead through Bogdan Stancu, whose scissor kick flashed just wide of goal.

France’s first shot of the match on target came on the 51st minute with Greizmann latching onto a through ball by Payet only to send his tame strike straight into the arms of Ciprian Tatarușanu.

Tatarușanu was called into action again soon after when he was forced to parry a superb long-range volley by Paul Pogba.

France were knocking on the Romanian door louder and louder.

The deadlock was finally broken on 57 minutes, however, as the Stade de France erupted into wild jubilation.

Olivier Giroud beat an outstretched Tatarușanu to a dangerous Payet cross and headed home to put the Euro 2016 hosts into the lead.

Tatarușanu should have done better, but France’s lead was short lived as on 65 minutes Romania were awarded a penalty when Nicolae Stanciu was clipped in the box by Patrice Evra and hit the deck.

Bogdan Stancu stepped up to the spot and coolly wrong-footed Hugo Lloris to make it 1-1.

The final quarter of the game was played with the same intensity as how the match began as both sides went in hunt of the winner.

When the winner finally came, it came with venom.

One minute from time West Ham’s Payet was rewarded for a man-of-the-match performance when he fired home an absolute cracker from long range and into the top left corner giving Tatarușanu no chance and France a last-gasp victory.

A collective sigh of relief could be heard from all corners of the host nation hexagon.

Person of the day: Dimitri Payet

For his man-of-the-match performance that included a stunning long-range winner one minute from time. 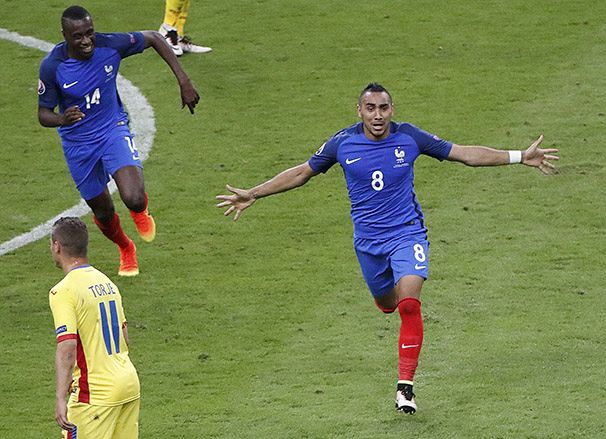 England will hope to carry over their qualification form into their first Group A game against Russia on Saturday at 21:00 CET.

The Three Lions squad, who won all ten of their games to reach France, is the youngest at the tournament with an average age of 25.

Roy Hodgson will be relying on his young guns notably Harry Kane and Jamie Vardy to do the damage in attack which means record-scorer Wayne Rooney could be slotted into the midfield for this one.

Leonid Slutsky’s Russia suffered a blow this week when the influential Igor Denisov was forced to pull out of the tournament with a thigh injury.

With fellow key men Alan Dzagoev also absent Russia’s strength in depth will be seriously tested at the Stade Velodrome in Marseille.

Wales are featuring in a major competition for the first time since the 1958 World Cup and they kick start their Group B campaign against Slovakia at 18:00 CET.

Joe Ledley has made a miraculous recovery from a broken leg and could play some part in Bordeaux.

Midfielder Joe Allen and striker Hal Robson-Kanu have also returned from injury and are expected to start.

Slovakia’s all-time top scorer Robert Vittek has been left at home due to injury meaning coach Jan Kozak will have to decide between Adam Nemec or Michal Duris to deputize up front.

With just a few hundred miles separating Albania and Switzerland this could be considered the first derby of Euro 2016.

Competition debutants Albania will be hoping to halt their poor form against the Swiss – they are winless in six matches against their Group A opponents, losing five of those encounters.

Albania coach Gianni de Biasi has no injury concerns while his Swiss counter part Vladimir Petkovic is hoping Watford midfielder Valon Behrami will pass a late fitness test and feature in the game in Lens which starts at 15:00 CET.