Egypt has invited archaeologists from all over the world to examine new analysis of King Tutankhamun’s tomb in the Valley of the Kings.

Scientists have completed more scanning of two recently discovered chambers behind the tomb, part of the quest for the remains of Queen Nefertiti.

British Egyptologist Nicholas Reeves says that although more research is needed, he believes she lies buried in the complex at Luxor, in the rooms hidden for millennia beyond the north wall of Tutankhamun’s tomb.

But locating her burial chamber will be painstaking work.

“We have to reach our goal, but we have to be sure, 100 percent, step-by-step, what we have to go, and we have to know exactly our road, for this reason we took several steps with radar scan,” said Mamdouh el-Damaty, former Egyptian Minister of Antiquities.

More scans are planned in April – and the world’s archaeologists have been invited to Cairo in early May to examine the findings.

It’s thought Tutankhamun’s tomb could be merely the outer area of a larger tomb belonging to Nefertiti, who was one of his father’s wives.

It could prove to be Egypt’s biggest discovery since the king’s 3,000-year-old burial chamber was uncovered in 1922. 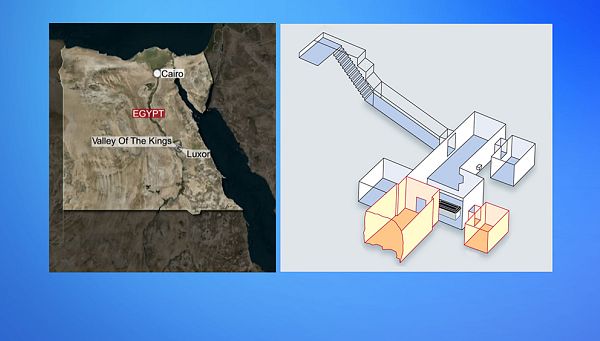 What is hiding behind the walls of King Tut's tomb? See exclusive photos from new radar scans: https://t.co/MA6j7Q47TD