France lags behind the rest of Europe when it comes to autism with around just one fifth of children getting the support they need, it’s been claimed.

Is France the worst in Europe at helping autistic sufferers?

Autisme France (AF) says the country has a backward vision of the disorder, putting its faith in psychoanalysts who consider it a form of psychosis, which goes against practices elsewhere in the EU.

World Health Organisation says autism, which is thought to affect one in 100 people in Europe, is a brain development disorder, characterised by difficulties with social interaction and a repetitive set of interests and activities.

France’s attitude means autistic children are not being diagnosed with the disorder, leading to exclusion from school, lack of educative support, sectioning in hospital or over-medication, according to AF president Danièle Langloys.

Langloys, speaking to Euronews ahead of the World Autism Awareness Day on Saturday, April 2, said: “Basically nobody dares question the psychoanalysts in this realm which blocks people from being diagnosed with autism and therefore stops them from receiving the care they need.

“In Europe we are lagging behind on this issue: we have a retrograde vision of autism, diagnosis is rare and often badly carried out, there is discrimination against people with an autism spectrum disorder (ASD) in school and in the professional world, there is misguided psychiatric treatment, a lack of educative and social support.

“Now, families seek help privately from autism specialists – that is a sector which is developing. So all in all about 20 percent benefit from requisite care. However for adults it’s a different story – no autism diagnosis, no services – we see these people wrongfully hospitalised in psychiatric wards.”

But French psychoanalyst Eric Laurent told the BBC that psychoanalysis was being used as a scapegoat and that treating the problem as a brain development disorder does not address autism’s root causes.

The Council of Europe has condemned France five times for ‘discriminating against people with autism spectrum disorders’, while the UN’s Committee on the Rights of the Child has criticised the country for institutionalising autistic children, added Langloys.

Autism Europe (AE) said despite this criticism, little has changed.

“From the reports we get from France, no, it’s not improved dramatically,” said Aurélie Baranger, AE director. “There’s been some improvements to a certain extent but support is still lacking for the moment.

One mother’s France fight for her autistic son’s future

Isabelle Kumar, a journalist at Euronews, tells her story of fighting the French authorities over care for her 15-year old son, Elias, who suffers from a form of autism.

She was initially told Elias’ development delays were down to his rare form of drug-resistant epilepsy. It wasn’t until he was 12 that he got a formal diagnosis saying he had an Autism Spectrum Disorder.

“I was at once furious and relieved thinking this might finally hold the key to help him learn. But how wrong could we be. 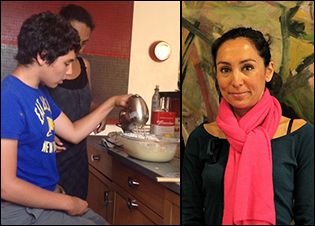 “Early intervention with autism is recognised as key to getting kids onto the path to learning. We had clearly missed that boat.

“But it was time for Elias to change school – we now felt armed with the sufficient knowledge to get him the education he finally deserved, only to discover there was nothing.

“There is enough evidence abroad to empirically prove what a child or adult with an ASD needs to succeed.

“But France has got stuck into an inexplicable rut refusing to admit that autism is a behavioural disorder believing instead it is a psychiatric problem. The country has recently realised its mistakes but the damage runs deep and real change is just not happening. Only two to three establishments in our region specialise in autism – the waiting lists run into years.

“Parents are held with mistrust. We were not even allowed to visit many of the institutions my son was eligible to go to, those I did filled me with horror. Kids with all forms of intellectual disabilities are thrown together in institutions and I saw them wandering around aimlessly. One school I visited smelt of faeces, others were dilapidated. When I spoke to directors and asked them what education programmes they had in place, I was accused of being aggressive, naive and misled.”

Isabelle helped to set up the association Autisme Ambition Avenir (Autism, Ambition, Future) which was launched last September. Each child is given a personalised teaching plan and the project has been praised by autism specialists in France and beyond.

“After all these lost years of struggling our son is finally making progress. I believe he may one day talk, he may gain some sort of autonomy, could even be happy. Though we desperately want to expand and help other children and adults with our project, I honestly cannot tell you how long we can keep going. We are working against a system that views change and innovation with mistrust, a system that cannot appreciate let alone support a pragmatic can-do approach, ultimately a system which seems to show no remorse but continues on its senseless path of guilty destruction of tens of thousands of lives that could have been.”

“France is often named and shamed as one of the worst in Europe because you would expect better from a country with the tradition of human rights and so on. But it’s not the case, unfortunately. There is still more to be done in order for the situation to be satisfactory for families of those with autism in France.”

Baranger said France had stopped exporting its ‘problem’ to Belgium but that funding was not being made available to help educate autistic children. Around 20 percent of autistic children are schooled in mainstream education in France.

But it’s not just children who are suffering. Baranger says many adults have been failed because were they never properly diagnosed, especially those born before the 1980s. This, she added, leads to discrimination in later life, including a lack of job opportunities. She says just 15 percent of adult autism sufferers are in full-time employment in the UK.

“We know the older generation very often have either been misdiagnosed or not diagnosed at all,” said Baranger. “Yes, to some extent they’ve been failed and people who still nowadays are not receiving support. It can lead to very dramatic situations where people are left completely on their own without any support and very isolated.

“In many cases it’s families that are left to care for adults with autism and when parents die or are no longer there to care for them they are often left alone and without any support. And we’ve seen reports in the news of people who have died because they did not have anyone to care for them.

“If the family is not there sometimes they will go to psychiatric hospitals where they will sometimes be heavily medicated in some countries and they will not receive adapted support for autism.”

Baranger said elsewhere in the EU awareness of autism had improved but that problems of getting a diagnosis persisted, for example in Belgium, where there are delays of a couple of years.

She said there are also problems around getting early intervention and support for autistic children that is evidence based.

“When I say evidence based it is just that sometimes we see that there are treatments and therapies that are offered to parents that can potentially be very harmful for children,” said Baranger. “For example we’ve recently received news from Croatia where apparently people were contacted to give bleach treatment – it’s a solution that contains bleach and which is said to treat autism, which is obviously completely false. But some parents without the right information and without access to proper support may be tempted to try anything.”

There have also been reports of a similar bleach treatment being offered in the UK, exposed by a BBC investigation.

Autism Europe, to coincide with the global awareness day, has launched a manifesto to help improve the lives of autistic people. It includes a call for the EU to develop a European strategy on autism to improve detection and diagnosis, promote evidence-based intervention and support and foster prevalence studies.

Your say: What do you think about the issues raised in this article? Have you got a story about autism care in Europe? We’d love to hear from you. Please email chris.harris@euronews.com