Luzon, the largest island in the Philippines archipelago, located to the north of country can and will surprise visitors. In a place where diversity and eclectic traditions are the norm the island takes variety a step further: you can dive, snorkel or surf; you can cruise the islands and atolls; you can check out spectacular rice-growing terraces; and you also have a chance to visit the very spot where some of the most memorable scenes from the 1979’s Francis Coppola’s classic “Apocalypse Now” were filmed.

If you are aiming to avoid the hustle and bustle of Manila, Philippines’ capital and the most densely populated city in the world, you can arrive on the island at the Clark International Airport from Europe, America and other parts of the world and head straight to the seaside. The airport was once a part of one of the largest military bases in the world, now it provides access to a free-trade zone in the centre of Luzon.

Once you head out from the coastal beaches, the fertile sea offers a wealth of underwater sights. Diving experiences around Luzon are among the most spectacular in the world. If you are not one for jumping in, there is a lot to be seen from aboard a ship cruising the waters: nurse sharks, reef sharks, blue spotted stingrays, large stingrays or massive sponges will give you a true “Finding Nemo” experience.

If you travel towards the north of Luzon along the west coast from the lively town of San Fernando to the deep waters of Pagudpud you will get chance to observe a gradual transformation of the land – from bustling surfing villages to wild and sparsely populated areas in the north. If you stop on the coast, even in the quieter towns and villages there are bicycle rentals available providing a fast and environmentally friendly way to explore the area.

The mountains of the Northern Luzon offer a breather after the hot humid plains and will strike you with the natural beauty of the slopes of the hills and the lakes. It is also here that you will find the rice terraces the Cordillera region is known for. There are plenty of opportunities for walking and backpacking holidays.

Rice terraces are enormous: they cover an area a third of the size of Belgium or just over the size of Cyprus! They are over 2,000 years old. Their irrigation systems are so sophisticated that they have not been changed in hundreds of years. Apart from everything else the terraces are a unique site and an extraordinary example of landscaping. 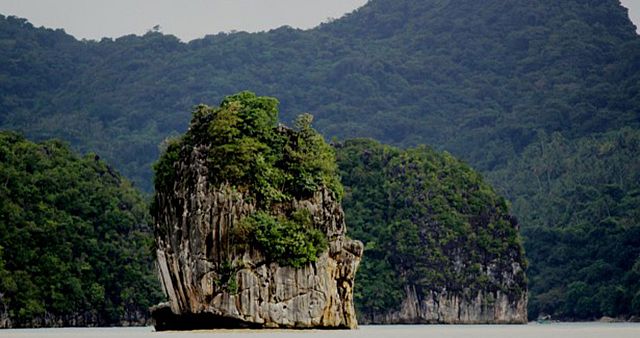 The south east of Luzon is all bays, inlets and hidden beaches. Circling the island on a ship will give you an opportunity to observe the coast line, watch the sharks near Donsol, or, perhaps stop off somewhere like Naga to explore the Caramoan Peninsula, a remote and exceptionally beautiful part of the Philippines.

Cruising the archipelago onboard a ship is a way to look at the hundreds of islands from a different perspective: you will get the idea of just how varied and kaleidoscopic these spots of land are. The Philippine tourism authorities are keen to develop the sector and have made cooperation deals recently with other countries, such as Vietnam, to make cruising in the region smoother.

And finally: if and when you come to the Philippines, be it to cruise the multitude of islands or explore the city life or the richness of local culture, find time to visit Baler, a small fishing village on the east coast of Luzon. This is where Francis Coppola’s classic “Apocalypse Now” was shot in the late 1970s. Not only the influential film about the mayhem of war made an obscure beach famous, it also helped to develop the local surfing culture.

Surf-obsessed Colonel Kilgore, one of the characters in the movie, played by Robert Duvall, utters one of the most famous lines in the film: “Charlie don’t surf”, “Charlie” being the nickname used by the US soldiers for their enemy, the Viet Cong. Filming of the movie transformed Baler beyond recognition: there was a battle enacted, a fake Vietnamese village, helicopters overhead and also the actors surfing in one of the scenes. When the crew left, the surf boards left behind were picked up by the locals, most of them young boys. They learned to surf quickly and spread the hobby among others. This is what Philippines is like: you never know what you are going to find – an interesting new dish, an exotic bird or a piece of cinema history.