On February 10, Andriy Kostenko, 45, was heading from Luhansk towards the town of Marinka when he found his route blocked by a queue cased by a military checkpoint.

Apparently trying to skip the line, he steered off the road and, moments later, his Volkswagen minivan struck a landmine. Kostenko and two passengers were killed.

Their deaths add to a civilian toll from concealed explosive devices that has already topped 260 in less than two years of conflict between Ukrainian government forces and pro-Russian rebel groups. A further 479 non-military personal are known to have suffered serious injuries when they ventured unaware into a minefield.

No one knows who planted most of the mines involved. The location of many may never even have been recorded; others have been marked only on rough sketches made by the soldiers who laid them.

Their dissemination, by thousands, marks a serious setback to decades of international efforts to eliminate the indiscriminate killing. Ukraine has joined 10 other nations around the world where anti-personnel mines are still being laid – North Korea, Iraq, Syria, Afghanistan, Pakistan, Colombia, Libya, Yemen, Tunisia and Myanmar. 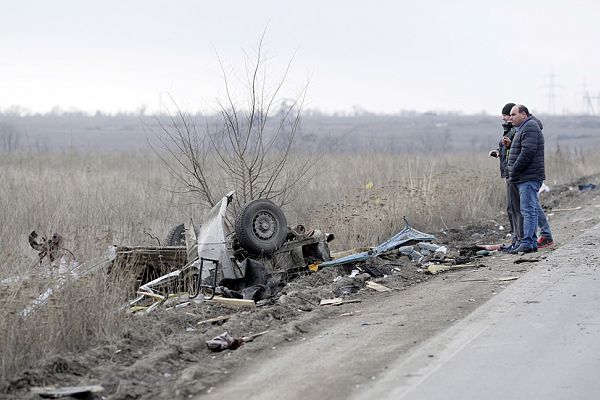 In 1997, a major international treaty banned the use of anti-personnel landmines and demanded that signatories, which included Ukraine, destroy their stockpiles. In September 2014, a deal between both parties in the current conflict extended the restriction to cover all types of mines. But loopholes in the small print and rows over implementation have meant the weapons continue to be used and promises to remove them have come to little.

The Ukrainian military has revealed to euronews for the first time that it is deploying devices targeting individuals as well as vehicles in the east of the country. The rebels have long been known to be doing the same, sowing a legacy that will take its toll on civilian populations in years to come, regardless of who ends up controlling the land.

But neither of the major agreements seems to have made a difference to the attitudes of the opposing sides.

“The parties have agreed not to lay any more new mines and, in addition, they have agreed to remove all mines that are in the safety zone [separating the two forces]. Our Monitoring Mission since September 2014 has documented multiple instances of mines being present and also instances of mines being laid,” said Alexander Hug, who helps lead a group from the Organisation for the Security and the Cooperation in Europe (OSCE), which is responsible for monitoring compliance with the Minsk Treaty.

The OSCE says the only efforts to remove mines have been where they pose a hazard for repairing damaged infrastructure like water pipes, the electric grid or the railway.

“How do you find the house with the red roof?”

Danish Demining Group (DDG), a humanitarian organisation which assists Ukrainian authorities in the clearing missions, says their task is beset by obstacles.

“There is very little information about where mines are since the government is the only one undertaking mine clearing.
There should be maps, but some soldiers made just drawings, and two years later, for example, how do you find the house with the red roof that was in the sketch?” says DDG’s Edward Crowther.

The rebels, with no responsibilities under international treaties, are blamed by Kyiv for starting the mine arms race by attempting to slow advancing government forces in May 2014. But by the end of August, both sides were creating no-go zones designed to protect a front line too long to man constantly.

Dmytro Tymchuk, a Ukrainian military blogger and member of the parliament in the party of the outgoing Prime Minister Arseniy Yatsenyuk, says Kyiv was forced to abandon promises to abstain from planting explosives because its opponents were taking no notice of their own obligations.

“Russia violated the Budapest memorandum [which guaranteed the security of Ukrainian territory] by seizing Crimea and that could justify the unilateral suspension of the Ottawa [anti-mine] Treaty by Ukraine,” he told euronews.

The Ukrainian military also argue that they have no need to abide by the Minsk 1 Treaty because the full cessation of hostilities on which it was based has never been achieved.

“The war is not over, and there is no fulfilment of the Minsk agreement. So it is too soon to say that we must remove all the mines,” said Coronel Konstantyn Anikonov, an official from the Ukrainian Ministry of Defence.

He also confirmed that Ukraine is using anti-personnel mines but denied that they violate the Ottawa anti-mine Treaty. 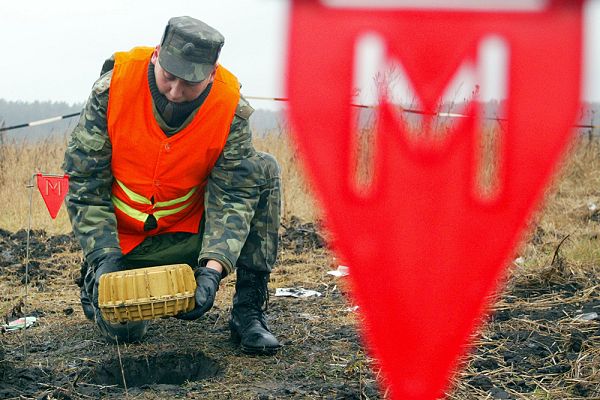 It is impossible to tell whether Ukrainian forces are breaching their treaty obligations because the type of weapons they are using can be permitted under certain conditions.

If anti-personnel mines are detonated remotely, they are exempt from the Ottawa ban. But if their fuse is linked to a tripwire, they are outlawed. The soldier in the field who plants the device is the one who configures it, so monitoring their use is effectively impossible.

Forces fighting for the rebel groups are accused of using explicitly illegal weapons not held in government stockpiles, but evidence comes only from civilian eyewitness reports and Youtube videos

Removing these weapons is problematic, especially because there is little leverage that can be applied to the rebel forces, who, like their main ally Russia, have no obligations under the Ottawa Treaty.

Officially, under the Treaty, Ukraine is supposed to remove all mines in territory it controls by June 2016. However this deadline already appears impossible to meet.

“For producing a mine the average cost will be like $2, let’s say, and the same mine, when it is underground, to find it, to take it out and to defuse it, it’s around $1,000,” said Matthias Weinreich from the International Committee of the Red Cross.

A more realistic alternative, in the short term, can be to raise awareness among local populations about the dangers of these devices. The EU, the Red Cross and the OSCE are all working on information campaigns while Kyiv is using signs and other markers to identify minefields.

The Red Cross has even installed portable toilets at checkpoints known to be surrounded by mines to save queuing locals from having to wander off the paths to relieve themselves.

Kyiv implemented the Ottawa treaty in 2006 as part of a broader move towards closer ties with the EU, and embarked on a programme of destruction of anti-personnel mines.

The project regarding the destruction of antipersonnel mines is funded by a NATO Trust Fund, Ukraine itself as well as the European Union.

Yet, the compliance of Kyiv with the Convention has been rather troubled, especially when it comes to its relations with the EU.

“The problem of arranging a financing for mines’ destruction has become a huge stumbling block, and I think that might have changed some views towards this treaty inside the Ukrainian military,” says Human Rights Watch’s Mark Hiznay.

The EU delegation in Kyiv noted that delays first came from difficulties in finding a suitable contractor or agency qualified to dispose of the explosives, and then from problems on the Ukrainian side in finding means to co-fund the project as agreed.

Since 2002, Ukraine has destroyed over 800,000 anti-personnel mines, but a stockpile of around 5.6 million mostly obsolete Soviet devices remains.

As a result, Kyiv missed a June 2010 treaty-mandated deadline for the destruction of all stockpiles and has therefore been in violation of the Mine Ban Treaty ever since.

Moreover, Ukraine stopped the mines destruction process soon after Crimea was seized by Russia, and resumed it only at the end of 2015. Even then, only the out-of-date and polluting PFM-1 anti-personnel weapons were destroyed.

EU sources confirmed to euronews that since mid-December over 100,000 PFM-1 mines have been put out of action.

Even once the war is over, it will be almost impossible to declare a minefield 100 percent cleared.

But the biggest problem could ultimately not be about money or the logistics involved in their removal.

As Ukrainian politician and military blogger Tymchuk suggests: “Mines are mainly the sign of the lack of confidence between us and them”.

By Sergio Cantone in Kyiv with additional contributions from Taras Semenyuk