How is the President of the USA elected?

Each state is allocated a number of Electoral College electors equal to the number of its senators and representatives in Congress, based on the state’s population. The most populous state, California, has 55 electoral votes, while the less populous states like Alaska or Delaware have just three electoral votes.

In total there are 538 electors (corresponding to the 435 members of the House of Representatives + 100 members of the Senate + 3 electors from the District of Colombia). A presidential candidate needs 270 of these electors’ votes to be elected President. 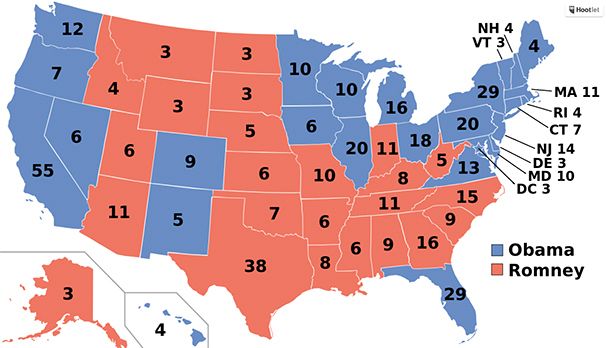 Most states have a winner-takes-all system: the candidate with the most votes on Election Day gets all electoral votes in that state, a simple majority being sufficient.

Again, this is not a national election in the European sense, but the outcome of 50 separate state elections – and the District of Colombia – with the results being added up. The electoral system focuses on the states – and the way Americans determine their presidential candidates reflects that. (Citizens in US territories like Puerto Rico can vote in primaries, but not in the presidential election.)

The United States has two major political parties which nominate their candidates after a series of popular votes, called primaries or caucuses. Once a winner has emerged from each party, that candidate is officially nominated at national party conventions in the summer – just a few months before Election Day.

This series of primaries and caucuses starts in the Midwestern state of Iowa and the New England state of New Hampshire in early February.

The schedule for the 2016 primaries and caucuses is available here.

Here is what you need to know to understand the process:

What’s the difference between a primary and a caucus?

While most states hold primary elections, a handful of states hold caucuses. The main difference between them is “who is running the show”, as the Washington Post remarks.

Primaries are organized and paid for by state governments and are carried out just like national elections; voters simply go to a polling station and cast a ballot for their favourite candidate.

Other primaries are ‘closed’, which means only card-carrying party members may vote in that party’s primary.

Others are partially closed, in which party members and voters unaffiliated with any party can vote.

Caucuses are conducted and financed not by state governments but by the parties themselves. The term “caucus” apparently comes from a native Algonquin word meaning “gathering of tribal chiefs”, and the caucus system is indeed a series of meetings. State party business such as the selection of local party leaders is discussed at these meetings, as well as the choice of presidential nominee. These meetings are held during the week and can last for hours, which generally means fewer people turn out for caucuses than for primaries. On the other hand, those who do attend caucuses tend to be more involved in party politics.

Parties have more control over proceedings in a caucus but must foot the bill for organizing them. In primaries, parties relinquish control to the state but also the cost.

How long do the primaries last?

There will be primaries and caucuses from February to early June 2016. But the nominees will likely be known well before the primaries are over. The earlier contests will narrow the field of candidates enough that a candidate is very likely to claim enough delegates to clinch the nomination prior to the final primary contest in June.

This is true even in a year as wide open as 2016 appears to be. In the past, the presidential nomination process has tended to produce two leading candidates: a frontrunner and an alternative to the frontrunner. These candidates are likely to emerge after the first few contests. Candidates who do not win the early primaries will find it more difficult to garner support from both voters and donors, and they will withdraw from the race when they feel they have no realistic chance of winning. For example, this is what led Republican candidate Rick Santorum to suspend his campaign after the first April 2012 primaries even though Mitt Romney was only a little more than halfway to the 1144 delegates needed to clinch the nomination.

The last two cycles — 2008 and 2012 — have shown that the leader in the Republican delegate count at the half-way stage in the primaries has gone on to clinch the nomination. In each cycle the race has been decided by the time 75% of voters have made their choice.

Judging by the likely primary calendar for 2016, March 8 would be the half-way point and April 26 would be the 75% marker.

What is so special about the Iowa caucuses?

The Iowa caucuses are the most hyped presidential contests in the country but also among the most confusing. Iowa has been the first-in-the-nation ballot since the 1970s.

Caucus night 2016 is on February 1. The caucus meetings will take place in 1,744 precincts across the state – including churches, libraries and other smaller venues, starting at about 17:00 local time (midnight CET).

Iowa’s Democratic caucus nights also take care of delegate assignments and state-level politics but are more complicated and dramatic. After arriving at a Democratic caucus site, participants essentially divide into groups based on their preferred candidate.

The top finishers often continue with their campaigns deep into the election cycle while those who finish at or near the bottom are often quick to drop out.

In addition, Iowa Democrats will have two additional ways to participate: satellite caucuses for party members who, for example, might have to work that night or are confined to a nursing home.

And active-duty members of the US military or Iowa National Guard serving out of state can participate via a “TeleCaucus,” according to the Iowa Democratic Party.