As part of our review of the year Euronews’ editorial team have chosen 12 of the most powerful quotes from 2015.

The French sentence means simply “I am Charlie”. After the massacre of January 7 at the offices of Charlie Hebdo, the usage of the “jesuischarlie” slogan spread outside of France’s borders. It became an expression of solidarity and support for freedom of speech and of the press. The slogan and the logo was created by French art director Joachim Roncin.

UPDATED: #JeSuisCharlie spreads around the world on Twitter http://t.co/bKMjDaUkL0pic.twitter.com/o7d01UZHzZ 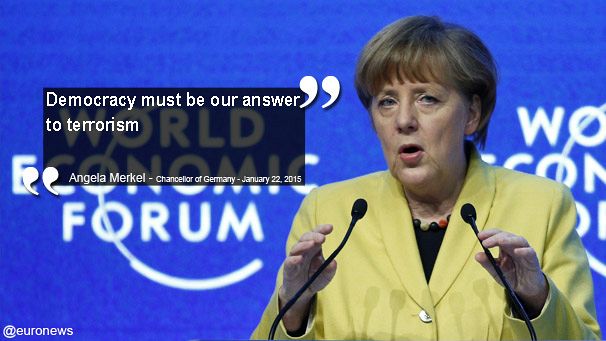 Angela Merkel held a speech at the World Economic Forum’s Annual Meeting in Davos on January 22 where she spoke about the attacks in Paris.

Rupert Murdoch, the Australian-born American media magnate, had his own take on the attacks, and shared them in a tweet:

Maybe most Moslems peaceful, but until they recognize and destroy their growing jihadist cancer they must be held responsible.

I was born Christian. If that makes Rupert Murdoch my responsibility, I'll auto-excommunicate. http://t.co/Atw1wNk8UX

Speaking about security in the English capital, Donald Trump said: “We have places in London and other places that are so radicalised that the police are afraid for their own lives”

Boris Johnson, the Mayor of London, hit back, saying: “The only reason I wouldn’t visit some parts of New York is the real risk of meeting Donald Trump”
More quotes from Donald Trump>>>

Both sides of the story

The Iran nuclear deal was not well received by all. While Mohammad Javad Zarif, the Iranian foreign minister celebrated it as “an historic agreement”, for Israeli prime minister Benjamin Netanyahu it was “an historic mistake”.

The Russian and Turkish presidents could not see eye to eye when a Russian jet was shot down by the Turkish air force. Vladimir Putin described the incident as “a stab in the back”, while Recep Tayyip Erdogan said “Turkey is on the side of peace”.

FIFA’s ethics committee might disagree with what Vladimir Putin said in an interview aired by Swiss broadcaster RTS on 27 July. The Russian president claimed that “People like Sepp Blatter deserve [the] Nobel prize”. 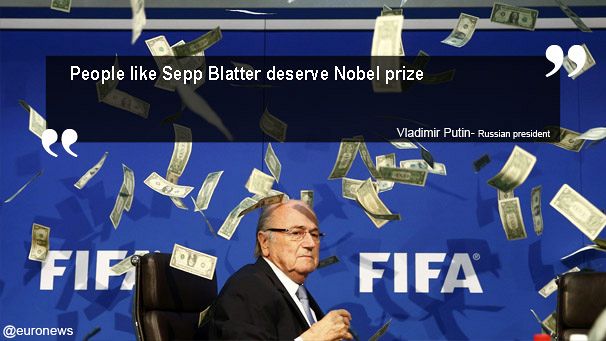 One man who has a Nobel Prize is Barack Obama. He said in Paris at the United Nations Climate Change Conference in December: “We are the first generation to feel the effect of climate change and the last generation who can do something about it.”

You can see the full speech here

With 2015 being the year that saw the migrant crisis reach its deadliest peak, Jean-Claude Juncker had a few words to say about the origins of European people. The President of the European Commission said: “Europe is a continent where nearly everyone has at one time been a refugee” in his State of the Union speech on September 8.

Pope Francis spoke up for the refugees several times this year. He mentionned them in his historic speech to the US Congress on 24 September . He described the refugee crisis as being “of a magnitude not seen since the Second World War. We must not be taken aback by their numbers, but rather view them as persons, seeing their faces and listening to their stories, trying to respond as best we can to their situation. To respond in a way which is always humane, just and fraternal. We need to avoid a common temptation nowadays: to discard whatever proves troublesome”

This was the response of Justin Trudeau, the Canadian Prime Minister sworn in this year, when asked why it was important for him to have a cabinet that was 50% women.

“I am the Normal one”

Jürgen Klopp, Liverpool FC’s new coach, gave himself this modest moniker in his first press conference at the football club on October 9. He was calming comparisons with former Chelsea coach José Mourinho, who had announced “I am the Special One” 11 years ago, upon signing for the London team.

“I’d rather you supported West Ham”

British Prime Minister David Cameron’s comment might not sound strange, except that he actually claims to support Aston Villa, a team based some 200 km north of the London side.

His comment came during a speech giving his plans for ethnic communities in the UK.

“We are a shining example of a country where […] you can support Man Utd, the Windies and Team GB all at the same time.

“Of course, I’d rather you supported West Ham,” he added, to the bemusement of many.

The PM put the gaffe down to “a brain fade,” saying:

“I’m a Villa fan … I must have been overcome by something.”

West Ham score against Aston Villa and David Cameron jumps for joy......no sorry he holds his head in desolation!

“Words that Change the World”

It’s not so much a quote as an entire selection of comments made by Russian President, Vladimir Putin, which have been compiled into a book.

“Words that Change the World,” a 400-page hardback, has reportedly been given to a select group of Russian officials.

Anton Volodin was among those at the Set Russian youth political movement who edited the book. He described the leader’s words as “prophetic.”

The perfect gift for the Russian politician in your life is this book of weird Putin quotes, says Putin fan: https://t.co/UzgFCRDNoF

It’s unclear whether or not Putin’s comments on disgraced FIFA head Sepp Blatter are included in the book.

“Blatter has done a lot for world football,” Putin said at his annual briefing in December. “His input in the humanitarian side is colossal,” he added shortly before making the Nobel Peace Prize comment we mentioned earlier.

In August, more than 500 days after Malaysian Airlines flight MH370 disappeared, officials confirmed wreckage washed up from the Indian Ocean belonged to the plane.

“Today, 515 days since the plane disappeared, it is with a heavy heart that I must tell you that an international team of experts has conclusively confirmed that the aircraft debris found on Réunion Island is indeed from MH370,” said Malaysian Prime Minister, Najib Razak.

Investigators are still determining what caused the plane to crash.

2015 was the year Jeremy Corbyn was elected leader of the UK’s Labour Party. A straight-talking figure, several of his comments have made the headlines, including this one:

“I notice in some of the papers that they have taken a bit of an interest in me. According to one headline, Jeremy Corbyn welcomed the prospect of an asteroid wiping out humanity. Asteroids are pretty controversial and it is not the kind of thing I would want to rule out… without a full debate at conference and a review so we can have the debate later in the week.”

Made during his Labour Party conference speech in September, the comment was a response to reports in the right-wing media.

Watch my full speech to Annual Conference - "Let us build a kinder politics, a more caring society together" https://t.co/8MRQxn1YJQ#Lab15

2015 was also the year the future of the past became the present, as it were. The year Marty McFly time-travelled to in the hit 1985 film Back to the Future. 2015? You mean we’re in the future? he asked. Not any more… 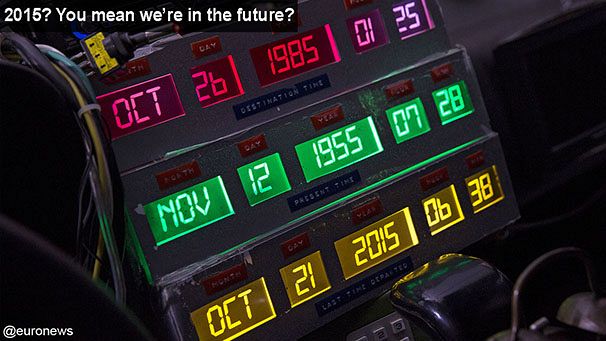