In the latest in a series of articles on how World War II changed forever the countries that fought it, Vincent Coste looks at France, occupied and on the front line of the Western Front of the world’s deadliest conflict.

A country re-starting from scratch

France was on its knees in 1945. The Nazis, the Allies and the French resistance had between them assured the destruction of 400,000 buildings with five times that number damaged. Industrial and agricultural production was running at just 40% of what it had been pre-war. The pitiful state of ports, train tracks, roads and bridges meant that those supplies that were available could not be easily distributed in a country where half a million hectares of land still needed to be de-mined. The French population was sick and very, very hungry: rationing would continue until 1949 and two thirds of children were suffering from rickets. One child in 10 did not survive childbirth. A summer drought and a bitterly cold winter also conspired against the French in 1945.

Help could only come from the state. De Gaulle’s government put in place a massive nationalization programme, funneling investment into heavy industry, as well as the finance, energy and transport sectors. Social reform was the reward for personal sacrifice; women were granted the right to vote in 1944, social security followed a year later. The post-war years provided a blueprint for the modern French state.

Photos: the town of Caen in 1944 (left); more than 2,000 German prisoners of war and French volunteers died clearing France’s fields of millions of landmines after the war (right). 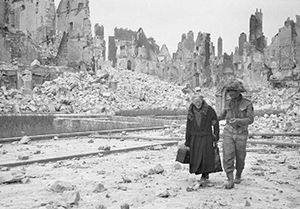 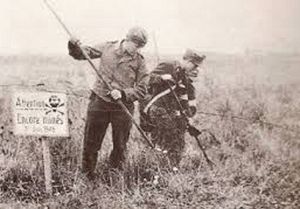 The France that resisted

Those French citizens who resisted the Nazi occupiers have been celebrated in post-war France, their ideals promoted by a governing class that needed to find positives to lift public morale. Due to the inherently clandestine activity of the Résistance, their numbers can only be estimated but they worked in their hundreds of thousands to help the Allies and hamper the Nazis as much as possible. The French government has officially recognized 220,000 resistance fighters, equivalent to just over 1% of the French population at the time, although many more participated to some degree. The Résistance was an umbrella term for many disparate groups and members came from all walks of life: young and old, rich and poor, Gaullist and communist. They fulfilled missions such as protecting Allied soldiers who found themselves behind enemy lines, providing intelligence to the Allies that proved crucial before, during and after the D-Day landings, damaging the Nazis’ logistics network and publishing underground pamphlets and newspapers . These missions they did at great risk – to themselves and to others. The occupiers would punish resistance activity by executing not just the perpetrators but other civilians they found nearby. Occasionally massacres were carried out to punish the actions of a few résistants. As ‘winners’ of the war, the French resistance was able to write its own history after 1945, and governments since have used – some would say exaggerate – its role as an example of French courage and national pride.

The France that collaborated

While one portion of the French population fought the Nazi occupation, another embraced it. The Vichy government, led by World War One hero Philippe Pétain, not only did what Hitler demanded but sometimes even took the initiative all by itself. It set up milicia to arrest and deport Jews to death camps on French soil. It sentenced Charles de Gaulle, the de facto leader of the Resistance in exile in London, to death in absentia. It actively sought to flush out and kill members of the resistance. But Vichy supporters paid the price for their complicity with the Nazis once the war was won by the Allies. When the Third Reich crumbled and left France in a state of lawlessness, people suspected of collaborating were summarily executed, women who had had relations with German soldiers had their head shaved. Once a stable government came in there were trials and many of Vichy’s leaders were sentenced to death (although Pétain died in jail, his sentence commuted to life imprisonment by De Gaulle). Whereas the Resistance movement was glorified in France after the war, there were conscious efforts to forget Vichy and the collaborators. France’s complicity in Nazi atrocities was not officially recognized until 1995 when Jacques Chirac said “these dark hours sully our history forever and are an insult to our past and our traditions.”

Below: Jacque Chirac (left) was the first French President to recognise wartime atrocities committed by the Vichy regime and its collaborators; current president François Hollande called his country’s role in the Holocaust “a crime committed in France, by France.” 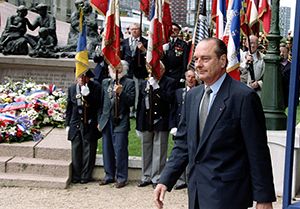 France and its colonies: the wars after the War

Despite the Nazi occupation and the gargantuan task of rebuilding, France nonetheless finished WWII as a victor with its colonial empire intact. For their wartime efforts, inhabitants of France’s colonies were granted some form of French citizenship. But the clamour for independence was such that this was not enough. The worldwide climate of liberation after the fall of the Nazi regime was echoed in the brand new United Nations Charter, which urged colonial powers to encourage self-government and satisfy the political aspirations of their overseas possessions.
But the French colonial empire would not dissolve quietly. In the decades after 1945 France would lose most of its colonies in what sometimes became an extremely bloody process. There were uprisings in Madagascar and Cameroon and brutal, full-blown wars in French Indochina (1946-54) and later in Algeria (1956-62), each of which claimed hundreds of thousands of lives and prompted an influx of millions of migrants into France from both the Maghreb and sub-Saharan Africa. Efforts to integrate these immigrants have in many respects failed and French society is still to come to terms with the demographic upheaval created as its colonial empire was dismantled.

A new world order emerged from the War as international agreements were made with the express purpose of avoiding another such worldwide conflict. One resulting institution eventually became the European Union. Driven by the prevailing ‘Never again’ attitude a series of treaties starting with the Brussels Treaty in 1948 led to a new European-wide process of integration. French public opinion may have been against a rapprochement with West Germany but the political class saw this as a necessity. In May 1950 French foreign minister Robert Schuman declared that “the coming together of European nations demands the elimination of the age-old opposition of France and West Germany. Any action taken must in the first place concern these two countries.” Within a year France, Germany, Italy and the Benelux countries had signed the Treaty of Paris to create the European Coal and Steel Community. A European project had been created with France and Germany its senior players.