The automatic rifles used in the terrorist attacks in Paris last month may have been decommissioned weapons legally bought in Slovakia and reconverted to fire live ammunition, euronews can reveal.

French police are exploring whether weapons used in the deadly assaults on the Charlie Hebdo offices and at a Kosher supermarket were purchased in a shop inside the European Union, according to a joint investigation with the Slovakian Nový čas newspaper.

The weapons are thought to have reached the perpetrators of the attacks – brothers Saïd and Chérif Kouachi and their accomplice Amedy Coulibaly – via an arms dealer in Brussels.

According to a senior police source, French investigators contacted their Slovakian colleagues last month with the serial numbers of seven firearms believed to be linked to the killings.

The Slovakian police officers tracked the guns to a shop in the west of Slovakia, where records revealed they were sold legally, as “expanz” (expansion) weapons. There is no suggestion that the store broke any laws.

Expansions weapons are originally live weapons, deactivated mechanically and turned into blank-firing guns to be used as props in movies, for historical reenactment or private collections. In Slovakia, such firearms are available over the counter, even the heaviest machine guns, to any person over 18. No license is required, just an ID.

The shop owner confirmed to Nový čas reporters that the police had come to talk to him but refused to give more detail on the grounds that police had asked him not to discuss the investigation.

A full range of weapons are available in this shop and the selection is even richer on the company’s website.

Among the fatigues, camoflage nets and ammunition, can be found deactivated versions of the firearms the Paris attackers are reported to have used to kill 17 people in Paris between January 7 and January 9: AK-47 assault rifles, Tokarev pistols, Scorpion submachine guns or the compact VZ 58 Coulibaly shows off in a video which emerged after his death.

Focus from AQAP back to ISIS with video release of Amedy Coulibaly praising Abu Bakr al-Baghdadi, via @siteintelgrouppic.twitter.com/trMJ1JIvkS

In the video, which appeared on jihadi websites the day after police stormed the kosher store where Coulibaly had holed up with hostages, the gunman claims responsibility for the attacks and pledged allegiance to the terrorist group ISIS.

To demonstrate how easy it is to purchase a prop weapon in Slovakia, it took five minutes, an ID and 250 euros for a Nový čas reporter to purchase a neutralized VZ 58 with a folding stock. (see photo below) 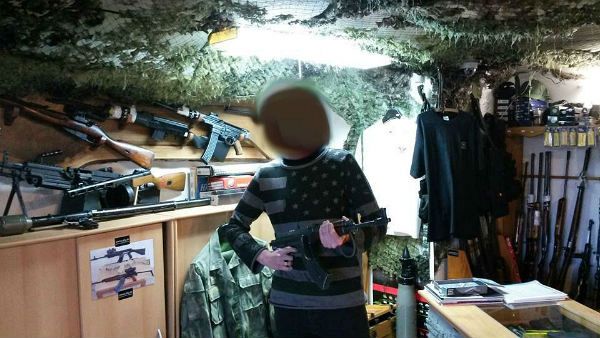 The Slovakian “movie prop” neutralisation method also does not affect the firing rate of the weapon, so blanks can be shot on full automatic setting. Consequently an illegal conversion will revert the firearm to its fully operational state.

Miklánek, a member of the gun rights association Legis Telum, compares the Slovakian method to that used in the neighbouring Czech Republic which is much harder to circumvent. Czech modified weapons cannot even be loaded with live rounds without extensive modification, which includes changing the barrel and other mechanical steps. Even then the gun still risks exploding when using live bullets.

With the Slovakian system, a conversion “depending on the type of weapons and equipment takes an hour, maybe two” he explains. “Foreigners have discovered that and have started using our weapons. They emerge in EU countries like Spain or France because we are in Schengen [the European Union area within which people and goods can move freely with few checks].”

The topic is sensitive and the investigation ongoing, so officials were reluctant to comment on the record.

The Slovakian Interior ministry did not deny collaborating with the French police. A spokesperson told our partners at Nový čas it “is working with partners abroad to examine the various clues and cases that may be related to terrorists attacks” but refused to go into specifics.

The ministry stated that the government was conducting an internal consultation to amend the firearms law related to expansion weapons but provided neither a timetable for the process nor a deadline for a vote.

Loïc Garnier, head of the French Co-ordination Unit of the Fight against Terrorism (UCLAT) told euronews in an e-mail he was well aware of the availability in Slovakia of neutralised guns easily convertible into lethal weapons, but also would not go into further details about specific investigations.

The French Interior ministry, the Paris anti-terrorist prosecutors’ office, an official for French intelligence and a French police spokesperson also declined to comment, all citing the confidentiality of the ongoing investigation.

The EU "unprepared to address the potential risks"

The conversion of blank-firing or deactivated guns, albeit strictly illegal, is widespread in Europe. In 2008, a man running a “factory” in London to convert replica firearms into lethal weapons was sentence to life in prison, according to The Guardian.

“Because there is obviously no record of illegal guns, any estimate as to the number around can only ever be a guess” leading British firearms consultant David Dyson told euronews by email, “but there will certainly be thousands” in Europe. And “any gun capable of firing a projectile can be used in a crime”. Or in an attack such as Paris or Copenhagen.

European institutions are fully aware of the problem. “Law enforcement authorities in the EU are concerned that firearms which have been deactivated are being illegally reactivated and sold for criminal purposes, [and that] items such as alarm guns, air weapons and blank-firers are being converted into illegal lethal firearms”, according to a 2013 document authored by the European Commission on firearms and internal security in the EU.

However, there are no EU-wide standards on convertibility or deactivation. The 2013 document merely suggests that “the Commission will propose common guidelines on deactivation standards for ensuring that deactivated firearms are rendered irreversibly inoperable.” This is currently not the case in Slovakia.

The evaluation of the 2008 Firearms Directive published in December 2014, the month before the Paris attacks, underlines the lack of common standards.

“The lack of clarity of the directive (…) left room for national interpretation, and in some cases led to security problems”, states the report.

“Difference in deactivation standards allow the circulation of deactivated firearms with different levels of security, and they facilitate the illegal trade of firearms parts,” according to the report. It goes as far as saying that “the EU is indeed [currently] unprepared to address the potential risks of reactivation.”

Reached by euronews for a comment, the European Commission had not replied by the time of publication.

The report concludes by giving the “harmonising standards and rule on deactivation” recommendation a medium priority.

Edit: 18/02/2015 at 12:20 to include the following reaction from a European Commission spokesperson

The Commission “will propose in its report to the European Parliament and the Council (due in summer 2015) ways to address this issue, as well as other issues related to the implementation of the Firearms Directive.“
“Aware of the importance of the security issues linked to de-activation, the Commission has been working since some months on common guidelines on deactivation standards and techniques and is aiming to have them adopted by the end of 2015. The Commission has proposed to Member States the adoption of guidelines as a legally binding implementing act.“