The Battle of the Frontiers was a series of battles fought along the eastern border of France, marking the period where German armies advanced through Belgium and across the French borders. The scale of the fighting was vast and proved to be extremely costly for both sides. The offensive approach during the Battle of the Frontiers had not worked for the French. Some 1.5 million men had been involved in fighting over the month and the number of dead, wounded or missing was already more than 350,000 for the Allies. 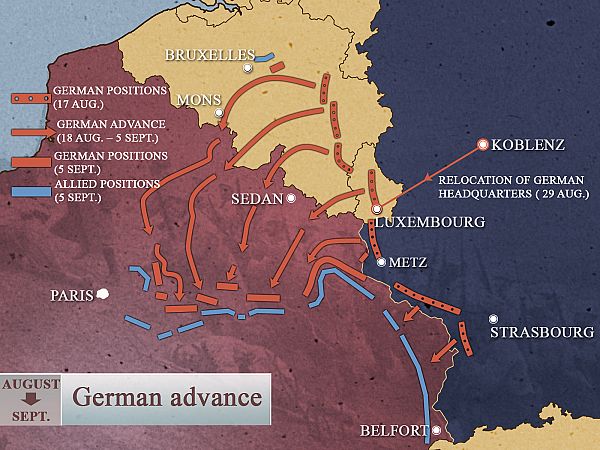 The first French attack of World War I was a march on the city of Mulhouse, in a region near the Swiss border that had been lost by the French during the Franco-Prussian war of 1871. It was seen as both a symbolic and tactical target, allowing French troops to be well positioned for further combat to the north.
Under the command of General Bonneau and following the plan of Commander in Chief Joseph Joffre, the French troops charged over the Vosges Mountains. On entering the area surrounding the city the French faced only mild resistance and Bonneau suspected some kind of a trap, however higher command ordered the troops on to Mulhouse where they found the city abandoned by the Germans.

With the French occupying Mulhouse the Germans mounted a counter attack in nearby Cernay on August 9. The two sides fought throughout the day but with German reserve troops beginning to surround the city and French reinforcements still far away the French began a slow retreat, having lost around 4,000 soldiers.

Despite the loss at Mulhouse the French continued their plan to take back the Alsace and Lorraine regions and its armies marched on the cities of Sarrebourg and Morhange on August 14. At first the German army appeared to retreat, only to come back harder, pushing their enemies back into France. Eight days after the attack had begun the French armies were back to their fortress zones from where they had started.

Battle of the Ardennes 21-23 August

To prevent a further advance of the German right flank and expecting numbers to be low in the forests of the Ardennes, the French 3rd and 4th armies were sent to attack. As they pushed through the fog, the two sides literally stumbled into each other and the French ‘bayonets drawn’ offensive style was no match for the Germans’ superior artillery which took them down in high numbers, killing an estimated 20,000 men.

Battles of Charleroi and Mons 21–23 August

While the Battle of the Ardennes was being fought, the French 5th army was facing clashes with the Germans further north, at Charleroi. The French were supposed to be supported by 100,000 soldiers from the British Expeditionary Force (BEF), a small but professionally trained group, but the British were delayed and ended up fighting a different battle at Mons, their first battle of the war. The French troops were outnumbered by the 2nd and 3rd German armies and suffered heavy losses after a couple of days of fighting. Over the course of a single day on August 22, some 27,000 French soldiers died at Ardennes and Charleroi.

With French armies collapsing all along the eastern line General Lanreezac decided to withdraw his men. His defeat forced the BEF to retreat from their battle at Mons for fear of being surrounded, a severe disappointment for the outnumbered British who had held back the Germans, despite suffering 1,600 casualties.

Although Lanreezac’s actions were not directly criticised at the time his retreat was later used as a scapegoat by headquarters for the failure of the French strategy.