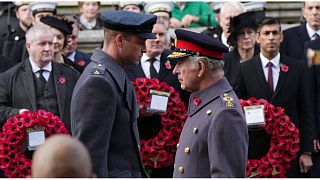 Britain's King Charles III led a Remembrance Day service for the first time as monarch on Sunday as the nation remembered its war dead.

Britain's King Charles III led a Remembrance Day service for the first time as monarch on Sunday as the nation remembered its war dead.

Charles and other royals and senior politicians laid wreaths at the Cenotaph, the national war memorial in central London, to pay tribute to the sacrifices made by fallen servicemen and women.

Remembrance Sunday is marked every year in the UK on the closest Sunday to Armistice Day on Nov. 11 with the wearing of poppies and a national two-minute silence observed at 11 a.m.

This year's ceremony is especially poignant for Britain's royal family because it marks the first Remembrance Day since the death of Queen Elizabeth II, who considered the day one of the most important engagements in her royal calendar.

Elizabeth, who died on September 8 at 96 years old, lived through World War II and only missed seven Cenotaph services during her long reign. Since 2017, however, Charles had laid a wreath on his mother's behalf as she watched from a nearby balcony.