Europe’s Mars rovers have a new playground in which to crawl and climb, as they prepare for a mission that will drill down into the Martian surface to hunt for signs of life.
Airbus Defence and Space today opened its new ‘Mars Yard’, a faithful recreation of the surface of the red planet filled with sand and rocks. The facility is at the group’s site in Stevenage, southern England.

The upmarket sandbox is a crucial test area for engineers building the European Space Agency’s ExoMars Rover, due for launch in 2018.

Paul Meacham, Systems Engineer on ExoMars at Airbus Defence and Space spoke to Euronews about the facility: “It’s three times the length of the previous Mars Yard we had. It’s really a big facility, and the reason for that is we need to be able to demonstrate the ability of the rover to drive itself autonomously across quite a large distance.”

“We’ve got all the soil types, the rock types, the slopes, we’ve got everything we need to drive the rover and demonstrate this autonomous system.”

One of the standout features of the new Mars test site is the lighting system, which Meacham singles out as a personal favourite. “We have about 60 different lights that are all selected to match the Mars spectrum, with the correct intensity, and we can create shadows and all the different lighting scenarios we expect to find on Mars.”

The lighting is essential for developing the ExoMars rover, as it will find its way around with cameras. “There’s almost no point qualifying a camera on Earth because it’s dealing with a completely different lighting environment on Mars, so that’s why having a facility like this is absolutely critical in the development of the cameras in particular,” Meacham explains.

Mars may be our nearest planet, but its landscape, environment, and even gravity are significantly different.

So what is the Mars Yard made from? “It’s something that’s reasonably close to one of the coarser sands that we expect to find on Mars. It’s sort of pebbles and reasonably coarse sand you might expect to find on a beach, but very, very dry,” Meacham told Euronews.
He admits the sand they used at Airbus Defence and Space has a rather curious origin: “The material is commonly used in the construction of tennis courts, so it comes from a construction material company basically.”

The question of gravity was approached with typical engineering simplicity. “We have several prototype rovers, and these are designed to be the same weight on Earth as the real one will be on Mars. “

“The gravity of Mars is about 38% of what it is here on Earth, so we’ve just made them with 38% less mass than the flight rover.”

The exact design of the ExoMars rover is yet to be finalized, but the fundamentals of the design are in place. It will have six wheels made from a flexible, lightweight steel that will deform and compress like a conventional tyre. There is an electrical motor above each wheel that will allow the rover to drive, turn and move sideways like a crab, meaning it should be able to get out of any nasty situations it may drive itself into.

While the engineers in Stevenage proudly unveil their new test site, the scientists behind the mission are in Spain to decide where it should land in 2018.
This week ESA is holding a forum at its ESAC astronomy centre near Madrid to discuss the different candidates, and within a few months they should have a short-list of three or four favored locations.

There are many different constraints to consider: ExoMars is solar powered, so it can’t land on the Martian poles; it will use parachutes to slow itself down as it lands, so can’t aim for the Martian highlands; and most importantly of all, it needs to begin its search in a spot where life may once have flourished.
ExoMars Project Scientist Jorge Vago underlined the importance of their choice in an interview with Euronews: “In a mission like ExoMars I would say 100% of the quality of the science and of the findings depends on targeting the right landing site, so this is a big, big challenge for us.”

If life formed on Mars then it probably did so around the same time as life emerged on Earth – that’s to say around four billion years ago.

So the best places to look are the oldest rocks on Mars: “Conditions today are so unfriendly to life that I would rather go to places where I think I have a chance of finding rocks from the very early history of the planet,” Vago said.

“Remember that anything from that time has been exposed to 3.5 billion years of Mars history, and that history has not been very nice to whatever bacteria there might have been there.”

Landing on an alien planet is not as easy as it seems in the movies. NASA’s Curiosity rover had a huge landing zone, or elipse, and the same will be the case for ExoMars.
This could stretch over the distance from London to Oxford. Vago highlights the problem: “It’s very hard to find a place that you can land on that is safe over 100kms, and is also interesting scientifically over 100kms, because the rover can only move a couple of kilometres, most of the time it’s drilling and doing science.”

“You can think of Mars as a sea, it’s not a sea of water but a sea of dust, and in this sea you have icebergs, these icebergs are not ice but outcrops, these outcrops are for the most part buried under the dust, but you do see the tips popping out, and we can look at those tips from orbit with satellites and look for the right mineral targets.”

Once in place on the red planet Vago and the science team will be pinning their hopes on the drill, which will probe much deeper below the Martian surface than any rover has ever done before. 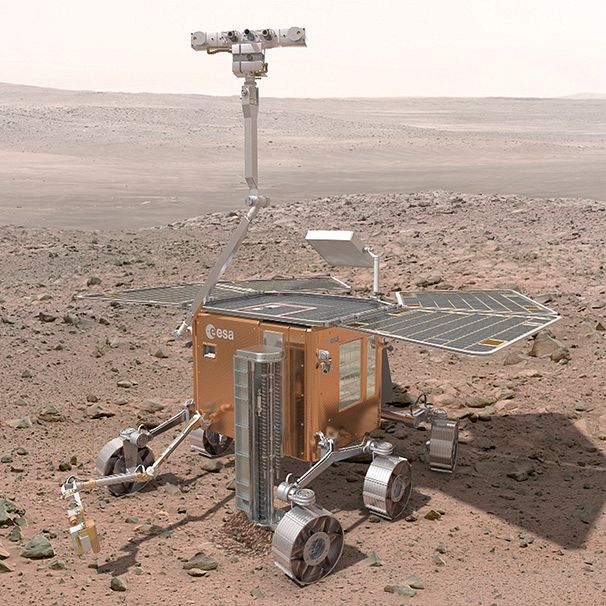 “The rover will carry something that is like a mini oil platform, it’s a drill that consists of four segments that have to be assembled in order to reach the maximum depth of 2 metres. And then a very small sample is collected and brought up to the surface, ingested into the rover’s analytical laboratory, crushed, and analysed,” he explains.

While the scientists hammer out the short-list of landing sites, the engineers have great plans to use and abuse their rovers in the Mars Yard and beyond.

Meacham sets out the menu: “We do various mechanical tests, we vibrate it, we expose it to static loads, we thermal-cycle it, we put it in a vacuum chamber.”

“For things like dust, there’s a special facility up in Denmark, which is essentially a giant dust chamber, and the whole rover will not go in there, but the individual components which will comprise it, the external ones, will all have to be tested to make sure they can handle that dust environment.”

When the real ExoMars rover rolls off the production line it should be tougher, more agile and more scientifically capable than any of its predecessors, and represent our best-ever effort to answer the biggest question of all: has our red dusty neighbor ever been home to life?