The following texts and multimedia elements are the product of a workshop of multimedia journalism at the European Youth Media Days that took place in Brussels on October 15-17 at the European Parliament. The participants worked with facilitator and euronews journalist Thomas Seymat, learning about new tools and tackling the issues of new social movements in Europe and how they use the media.

A successful social movement online: the defeat of ACTA

ACTA was first officially proposed in 2007. From the beginning of discussions in 2008, until the final rejection of the proposal by the Members of the European Parliament, social media had an enormous impact on the fate of the bill. Demonstrations were held all over Europe, Twitter and other social media were used to contact, support and encourage the MEPs to vote against ACTA. In total 2.8 million European citizens signed a petition calling for MEPs to reject the agreement.

Protests across the EU in pictures 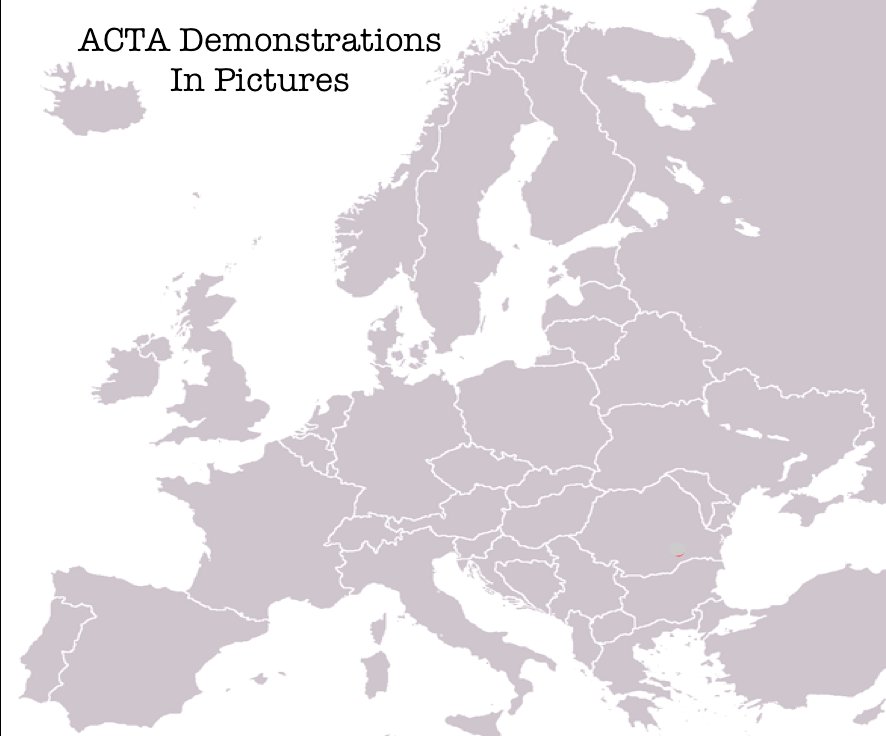 The ACTA vote in the EP

“The victory belongs to all activists who have been blogging, demonstrating, and contacting members of the European Parliament to persuade them to vote no”.

Journal-activism: a new species or a dangerous hybrid?

The civil society is fading from the public discourse. The warning cry does not come from independent environmental activists or experienced
volunteers: The fading public voice
is the enlightening title of recent (2013) Danish research recording the progressive disappearance of the voices of volunteers, activists and third sector workers from the mainstream public discourse and the most important media. Especially since the beginning of the economic crisis (2008), newspapers and news channels are mainly focusing on politics and economics, while other sections (culture and society, for
instance) have been largely reduced. The phenomenon is not limited to Denmark – in Germany, journalists and politicians are often accused to be living in a space-ship]
far away from their readers’ daily lives. Thus, this is just one side of the story: through new and social media, activists and NGOs can directly reach their audience, supporting and sometimes even replacing traditional media as information source.

“New and social media offer much more than some new communication tools, a website or a Facebook page”, confirms Ron Salaj, social media consultant at UNICEF Innovations Lab Kosovo and human rights activist.
“Take the ‘occupy movements’, for example: they used Twitter as a main means to spread the word and report real-time what is happening in the field, they used livestream channels to broadcast from the protests and tell a different perspective from TVs and newspapers. Occupy folks used blogs to tell in-depth stories from the field, photos to document and illustrate the stories, and podcasting to make the voice of the protesters heard and to amplify the message.”

If it reads a lot like journalistic work, the pun is actually intended. “Journalism and activism can be great enemies, especially since many journalists have agreed to serve the governments and leaving citizens on second hand” continues Mr Salaj. “But journalism and activism have also lot in common: brave journalists investigate big cases, raise sensitive community issues and document various concerns in the field. In Ukraine, for example, during the ‘orange revolution’ dozens of journalists have been imprisoned and murdered because of their stories. And these type of journalists are also activists.”

Many professional journalists would not agree about that. “That is not activism – rather, simply what a journalist should do”, says Alessia Cerantola, journalist working at IRPI, the Investigative Reporting Project Italy. Although IRPI does understand its role in the society as a tool for democracy (‘we work for public interest’
says the homepage to the project), they abide to the differentiation between their profession as journalists and the one of activists.

Smartphones, the Internet, the new media and the social networks are excellent means to help every citizen to run stories from the field, documenting cases and share them widely with audience through blogs and social networks. But is this journalism from below actually supporting or a substituting the traditional form?

Noresharski is probably one of the best examples of blurring between activism and journalism. The project was started during the protests in June this year caused by the appointment of Delyan Peevski as chief of the National Security Agency, and aims at ‘publish[ing] accurate and objective information’ on the protests. “I had the idea when we noticed that some facts happened during the protests were denied by the government and found therefore no space on the mainstream media. But I witnessed some of them and knew what really happened”, tells Nikolay Staykov, one of the founders of this information agency. As a trained journalist with several years of experience, Mr Staykov knows very well the information system – and its limits. “The problem with traditional media was the way of dealing with news. If the government was organising a ‘counter-protest’ to tackle ours, the media were just superficially reporting of ‘two protests’. It is like talking of a football match as of two teams playing, without saying who played better and who won!” When asked about bias, Mr Staykov smiles: “everyone has them. At least, we write it on our homepage – I think that false neutrality is much more dangerous”.

video of the Bulgarian movement protests

Reliability is probably the central issue at stake and everybody agrees on that. “When you give false information a couple of times, you are out of the game” adds the Bulgarian journalist. “It is true that fact-checking has become weaker in traditional media, thus social media has a weak point in it as well” points out Alessia Cerantola.
“During the Fukushima disaster, for example, many tweets passed off as workers at the nuclear plant. It was false, but some media took the tweets and reported them.

The fading voice of the civil society, then, could be a problem limited to mainstream media, while finding its own place on other, new kinds of media. That will not mean the end of journalism – just its transformation.

An Overview of how Portuguese are fighting against austerity3>

This timeline describes the main events that marked the portuguese struggle against austerity.

Five Star Movement: from internet to the institutions

A timeline on how a protest grassroots movement organised itself to win the elections.

Thanks to the internet and social networks, a lot of social movements have created and developed, each one fulfilling specific interests and trying to influence policymakers. Nevertheless, the main problem with these movements is their transience: the internet in itself has proven an invaluable tool for raising awareness for grassroots group, but it is much more difficult for them to organise and institutionalise, so as to influence more in depth the policy making process.

An important exception to this has been, in recent years, the rise of the Italian Five Star Movement. In origin a simple association of different groups of local activists coalesced around beppegrillo.it, a blog founded by former comedian Beppe Grillo, the movement quickly grew into becoming one of the main forces of the Italian political arena. Its disruptive political agenda, together with the charisma of Beppe Grillo, explains this quick rise to prominence.

Nevertheless, together with political success came also negative consequences: the control of the Movement has become increasingly more centralised in the hands of Beppe Grillo, directing it with political proclamations from his blog. The following timeline shows the main events in the Five Star Movement’s development through its founding blog. And the facts suggest that it is very hard for a grassroots movement to successfully enter the political arena without changing its nature.

Even before it entered into force, the Hungarian constitution came under intense scrutiny from both home and abroad. Concerns were being voiced, with tweets and blogs and Facebook posts warning that the supreme law is a dangerous anachronism meant to cement the government’s power beyond its term and limit civil liberties.

"When is Dennis Rodman arriving?" – one placard at a Budapest protest against constitutional changes. http://t.co/5W0d1Y2XL4

Other articles of the new constitution ratchet up even more criticisms. And nowhere were those criticisms better articulated than on the internet and through social media. Some say that they are no more than recycled 19th century ideas aimed at strengthening the ruling party’s grip on power.

Detractors of the new constitution reacted to the changes by asking people to take to the streets and voice their discontent. Twitter played a big role in rallying people, organizing protests, sit-ins and mass gatherings.

Thousands of citizens answered the call, swamping the streets of Budapest in protest against what they saw as anti-democratic moves by their prime minister and the two-thirds majority in Parliament.
Meanwhile, left-wing and liberal MEPs expressed concerns over Facebook and Twitter believing the document to “violate international and European human rights standards”.

Empower women and see how much society earns

By Joanna Socha and Noémi Patai

All over the world the average salary of a woman is lower than a man.
Nothing new, right? So why do we still need to talk about that? The principle of equal pay should not only be seen as a principle but also effectively implemented in practice.

According to National Committee on Pay Equitty in the United States the average wages of women in 2012 amounted to 76 percent of those of men. The latest figures show also that woman across the EU are bringing home 16,2% less than their male counterparts (Data as at March 2013). The gender gap varied by 25 percentage points across the member states, ranging from 2% in Slovenia to 27% in Estonia. The differences are seen at most of the job positions, starting at the specialist level and are deepening at higher positions.

It is not only the assumption of a women being too emotional that can be a reason for not considering them for top positions. Cécile Gréboval from European Women’s Lobby, an organization which received the European Citizien Prize this year says the history is a very important factor as well. Despite the fact that the problem of women’s rights has been an issue for hundreds of years in Europe and everyone seems to be aware of the importance of the equality, there is still much to be done. *The fact that European Women Organization received the European Citizen Prize this year shows how big the problem still
is.*

Unequal pays are often justified on the grounds that men are the sole earners of the family wages. According to a publication of the Directorate for Impact Assesment and European Added Value Equal pay for men and women, for equal work of equal value for unequal pay may expose women to violence and exploitation. Apart from that, the gender pay gap not only affects women’s income during working lives, but it also has an effect in terms of their pensions and vulnerability to poverty later in life. The principle of equal pay should not only be seen as a principle but also effectively implemented in practice. We have to understand that when this will happen, the whole society will benefit.

According to Equal pay for men and women, for equal work of equal value “Unequal pay makes women, particularly low-paid women, particularly reliant on supplementary income from welfare support, which is an unnecessary drain on public resources (…)The fact that such a significant proportion of the population has lower incomes and less purchasing power has a substantial impact on both the tax base and on women’s purchasing power throughout their lives”.

Things are getting better in terms of empowering women in Europe. The prize for the European Women’s Lobby is just one example. The other one is that European Parliament committees have finally backed the Commission’s proposal to have 40% women on company boards. The committees failed to extend it to executive boards, but eventually we can see some progress.

Protests in Europe throughout the years