The driver of the train that crashed last week in Spain’s worst rail accident for decades has told an investigating magistrate that he “does not understand” why he did not brake in time to prevent the disaster.

The Spanish newspaper El País has published a transcript of a key part of the interview carried out on Sunday by investigators with 52-year-old Francisco Garzon.

79 people died when the train from Madrid to Ferrol in Galicia crashed near the station at Santiago de Compostela on 24 July. 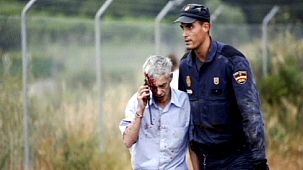 According to the Madrid daily, the recording of the interview reveals a man “completely downcast by the event”.

The driver is asked what he was thinking about before entering the tunnel just before the curve in the track where the train derailed.

“I don’t know, I wish I knew… The stigma that I will carry for life is enormous,” Garzon replies.

Pressed on what was going on in his mind, the driver insists: “Your honour, I’m telling you honestly that I don’t know, I’m not so mad as not to brake.”

The conversation moves on to the fatal few seconds as the train went into the curve.

“Did you activate the brake at any moment?” asks the magistrate.

Later, when Garzon acknowledges the train was travelling at between 180 and 190 kilometres an hour, the investigating magistrate Luis Alaez asks him why he did not slow down.

“I can’t give an explanation for it, I don’t understand, as I didn’t see it.”

The judge points out that the driver was travelling at well above the authorised speed for four minutes: “At the entrance to the tunnels you don’t realise and you don’t slow down.”

“When I realise, it’s that there are more tunnels and I can see that calmly but no, no, no…” Garzon replies.

According to El País, the driver did not mention to investigators that he had been talking on the phone at the time of the crash.

Following the interview, analysts said data from the recorders – the so-called black boxes – recovered from the wreckage revealed that the driver was talking on the phone at the time of the accident.

The state train operator Renfe had called him minutes beforehand to discuss planned movements once the train arrived at its destination at Ferrol.

Investigators said analysis of the conversation and background noise suggested the driver might also have been consulting a map or another document.

The section of track where the accident happened has an authorised speed limit of 80 kilometres an hour. The black boxes are said to have revealed that the train had been travelling at 192 km/h for several kilometres prior to the crash, and that after the driver braked the train then came off the rails at 153 km/h.

The investigation is also probing whether the train, the tracks or the security system that slows down the trains may also have been at fault. The section of track where the crash happened lacked an automatic protection system, present on most high-speed lines.

Francisco Garzon, an experienced train driver, has been provisionally charged with “79 acts of homicide through negligence”. He was freed from custody under judicial supervision and his passport has been withdrawn.

Dozens of injured passengers remain in several hospitals around Santiago de Compostela, with 15 in a critical condition.