A new regulation just announced by the European Commission aims to cut back on the red tape and bureaucracy that citizens and businesses face when they have to use public documents across European borders. The current system of getting documents such as birth and marriage certificates authenticated between states can be costly and time-consuming, with rubber-stamping exercises described by European officials as absurd and arcane. ‘Abolishing some of these requirements will save citizens and businesses in the EU up to 330 million euros, not counting the saved time and inconvenience that is avoided,’ says the European Commission.

The proposed changes, if approved by the European Parliament and the Council of Ministers, would see the abolition of traditional formalities known as ‘legalisation’ and ‘apostille’. The new regulation would also mean that citizens would no longer have to present a certified copy together with the original public document (12 categories of documents are covered); and non-certified copies would be allowed to be presented together with the originals. Also, non-certified translations of public documents issued by officials in other EU states would have to be accepted. The European Commission is also proposing the optional use of multilingual EU standard forms and better administrative cooperation between countries to help fight against fraud.

But there are some who thought the new regulation would go much further and tackle the controversial issue of whether EU states have to recognise the actual contents of public documents issued in other member states. One of the examples put forward was whether or not a gay marriage certificate issued in one EU country would have to be legally recognised in another state where same-sex marriages are illegal. In a press release on the new proposals, the European Commission made the situation clear: ‘The new rules will not have any impact on the recognition of the content or the effects of the documents concerned. The new rules will only help prove the authenticity of the public document, for example whether a signature is authentic and the capacity in which the public office holder is signing. This will have to be mutually accepted between Member States without any additional certification requirements.’

This may be disappointing news for some of the organisations that made submissions as part of a public consultation on the subject in 2011. Commission officials said its green paper on the issue was the ‘first stage in a process to make sure that public documents circulate without the need for additional procedures, and that the effects of civil status documents – such as a birth certificate – are recognised wherever citizens are in the EU’. Many of the submissions dealt with the issue of recognition, with views for and against, and the same-sex marriage example was often put forward.

The organisation ILGA-Europe, the European branch of the International, Lesbian, Gay, Bisexual, Trans and Intersex Association, had this to say in its submission: 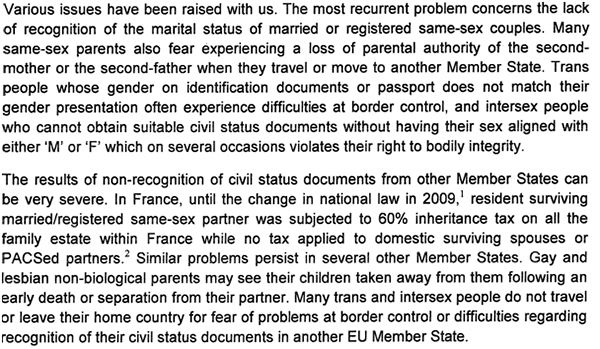 In contrast, this was part of the submission made by the Commission of the Bishops’ Conferences of the European Community:

‘Some of the options mentioned in the Green paper, in particular as for the mutual recognition of the effects of civil status records, call for an extremely careful approach, as they give rise to a number of legal and ethical concerns. Some of the documents involved are closely linked with matters of high sensitivity that stand at the core of the Member States’ national sovereignty, in areas in which ethical implications and national sensibilities and peculiarities come into play (e.g. marriage, civil/registered partnerships, adoption). We are concerned that some of the solutions suggested by the Green paper would devalue such national sensibilities and legal traditions (if not divest them of particular significance). The richness of Europe is also in its diversity. This diversity should be preserved and not questioned or crushed by levelling exercises at the EU level. Full respect for the diversity of national legal orders and for the different Constitutional traditions, as well as for the Member States’ public policies, should guide the EU actions on this matter.

‘It should also be remembered that Article 67(1) TFEU states that the Union shall constitute an area of freedom, security and justice with respect not only for fundamental rights, but also for the different legal systems and traditions of the Member States. Any imposition on the Member States, including in the area covered by the present consultation, would clearly violate this provision. For these reasons, we would recommend excluding documents relating to the above-mentioned areas (marriage, civil/registered partnerships, adoption) from the scope of application of any proposal the Commission will issue on the basis of this consultation.’

For now the European Commission is focusing only on simplifying the procedures on the use of public documents across European borders, avoiding the thorny issue concerning the recognition of the contents. But could further action be taken in the future on this? For now nothing concrete has been announced publicly. And how would all of the different views, expressed in very strong terms in the public consultation process, be reconciled?