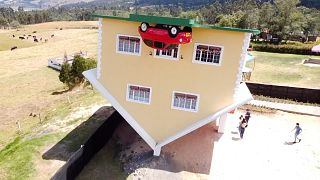 Guatavita's 'Casa Loca' is a construction on the outskirts of Bogotá that has become the new Colombian tourist sensation.

Better known as the upside-down house, it has all the furniture in the opposite direction of a typical building.

The construction has an inclination of 5 degrees to the left and 5 degrees backwards, which generates an "optical" illusion in its visitors.

The peculiar house is the brainchild of Fritz Shall, an Austrian living in Colombia for 22 years, and has attracted hundreds of tourists in less than a month after its inauguration.

Inspired by a similar house in his homeland, the construction began two years ago, and although the pandemic delayed its launch, the "Casa Loca" opened its doors on January 8th.

Fritz Schall, Crazy House's creator, says it was not an easy task: "People didn't believe in this."

Local tourists support this type of initiatives, after a long time of pandemic.