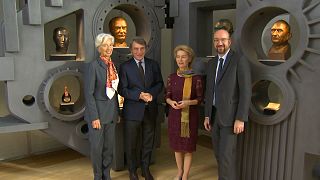 EU Parliament President David Sassoli, who was elected in July this year, was joined by von der Leyen and Michel, as well as European Central Bank President Christine Lagarde, at Sunday's event.

Signed on December 1, 2009, the Lisbon Treaty, which aimed to facilitate EU decision-making, created the position of a long-term president - the EU Council president - and enhanced the powers of its foreign policy chief. It also handed more power to the European Parliament, which shares some legislative responsibilities with the European Commission, the body's executive branch.

With the EU Parliament has declared a state of "climate emergency" on November 28, von der Leyen is expected to unveil her "European Green Deal" on December 11.

An EU leaders summit, the first one to be chaired by Michel, is scheduled to take place the next day.