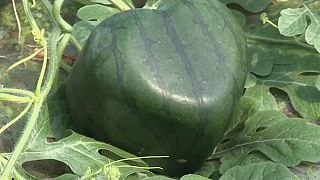 Updated: 07/08/2017
<p>The proverb “rarity brings high prices” has proven universally true and lastingly so. Thirty years since its invention, square watermelon still fetches some 150 U.S. dollars per fruit in its birthplace of Japan. <br /> But some salesmen argue that square watermelon was invented as an indoor ornament rather than fruit.<br /> “Square watermelons are not meant for eating in fact. They are sold as ornamental items for household decoration. They are good for at least one whole month kept at room temperatures,” claimed Mura Kengo, store owner of Shibuya Nishimura Fruit Parlor. <br /> Imaginative artistry aside, there must be some rationality behind the invention of watermelons in this outlandish shape of a cube. <br /> Some media reports have attributed the invention of square watermelon to a 1980s Japanese farmer hailing from Zentsuji of Kagawa. This inventive farmer grew his fruits in square molds to result in square watermelons which save space in refrigerators and facilitate long-distance transportation. And square watermelons grow into 18-centimeter cubes till they mature to weigh some five kilograms (11 pounds). <br /> But still, square watermelons after so many years of their invention have remained more of an expensive household ornament than a summer thirst-quenching fruit. <br /> “I’ve seen square watermelons on TV many times before. It’s adorable. I’ll buy one to take home,” said one Tokyo shop-goer. <br /> The sky-high prices for square watermelon have enticed and encouraged profit-chasers to grow watermelons in various other shapes, like heart-shaped fruit and pyramid-shaped fruit. <br /> Now with profit-driven inventors joining the fray, whatever other shapes will there soon be, only time can tell us all.</p>
no comment