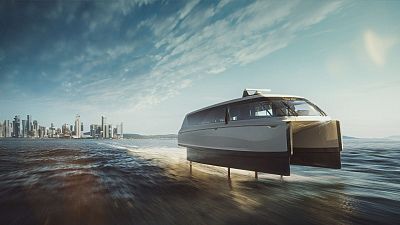 The world’s fastest electric ship will soon navigate the archipelago around Stockholm in a bid to make public transport by water more attractive.

The Candela P-12 Shuttle will begin operating in Sweden’s capital next year with its makers claiming the vessel to be not only the fastest of its kind with a speed of 30 knots, but also the most energy-efficient electric ship ever.

It’s hoped it will make marine public transport in the city more attractive than trains, buses and cars.

The water-borne shuttle has three carbon-fibre wings that extend from under the hull, allowing the ship to lift itself above the water, thus decreasing drag and increasing speed and stability.

"Flying" across the water, the shuttle will transport commuters between Ekerö - a rapidly-expanding neighbourhood in Stockholm's suburbs - and the city centre “faster than the subway and bus lines it competes with, as well as to car-travel during rush hour,” said the company in a statement.

The Candela P-12 Shuttle covers the 15 km route in only 25 minutes, saving travellers about 50 minutes every day.

Because of its innovative design, the boat creates a “near-zero wake” and it has been granted an exemption from the 12-knot speed limit in the Region of Stockholm, meaning it can navigate full speed and fly into the city centre without causing wave damage to other vessels or sensitive shorelines.

“There’s no other ship that has this kind of active electronic stabilisation. Flying aboard the P-12 Shuttle in rough seas will feel more like being on a modern express train than on a boat: it’s quiet, smooth and stable,” Erik Eklund, Vice President of Commercial Vessels at Candela, said.

Thanks to its state-of-the-art technology, the world’s fastest electric ferry can compete on mileage costs and can be inserted on new routes without massive infrastructure investments since all it needs is a dock and electric power.

The Candela shuttle will begin a nine-month trial period in 2023, and if it meets the high expectations placed on it, the hope is that the it will eventually replace the city’s fleet of over 70 diesel vessels.