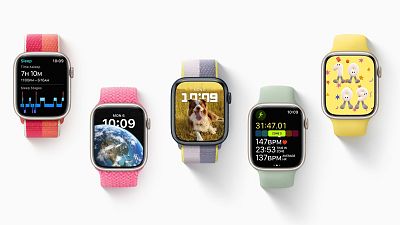 Apple has, once again, revealed a slew of new launches in a bid to keep up with the rapidly evolving tech landscape.

There’s so much it’s hard to keep up with, so here’s our top list of new announcements you should know about.

A new iOS update that lets you edit and recall messages

The iPhone is getting a new and improved operating system, iOS 16. It includes a revamped lock screen, fresh with new widgets and greater personalisation, and a new approach towards notifications.

Sent that text too quickly? Users will now be able to edit recently sent messages or even recall them entirely by clicking “undo send”. They can also mark conversations as unread so they can come back to them later.

Apple Pay Later, a feature which allows users to pay using Apple Pay in four instalments over six weeks without any additional fee, was also a key part of the reveal. This particular feature is likely inspired by the rising popularity of buy now pay later businesses, such as Klarna, over the last couple of years.

The new iOS will also bring updates for CarPlay, including new gauge clusters, and carmakers including Ford and Jaguar Land Rover will feature the software in a new, integrated dashboard.

The new macOS, dubbed Ventura, will have updates to the Mail app, camera software updates and improved productivity features. However, the new version of macOS announced means that there are a number of Macs that can no longer run Apple's newest desktop operating system. This includes the 2015 Macbook Pro, a well-known fan favourite due to its traditional keyboard design compared to the butterfly keyboard of its successors.

Models compatible with macOS Venture are:

Newer MacBooks have also been unveiled: a brand new MacBook Air and MacBook Pro, which will be available for purchase next month. The MacBook Air will weigh just 1.2kg and will measure just 28.7cm. The model will also be fitted with a 13.6-inch liquid Retina display, a new Magsafe charging system and a headphone jack.

The new MacBook Air and a MacBook Pro will include the M2 chip, the successor to Apple's first in-house chip, named M1.

The M2 chip, which comes with 24 gigabytes of unified memory, is 18 per cent faster than its predecessor and can playback multiple streams of 4K and 8K video.

The iPad will also be updated

But it’s not just the Macbook and iPhone getting all the attention. Apple has also announced a number of new features for the iPad too.

These new features aim to increase the productivity of iPad users, in a bid to make iPad apps more “desktop-like”.

Apple Watches get a health and fitness focus

The tech giant also announced it received the US Food and Drug Administration's clearance for its atrial fibrillation (AFib) health feature in users aged 22 and older with no previous history of AFib. This condition causes an irregular and often abnormally fast heart rate that can result in a stroke and other heart-related complications.

The Apple Watch heart rhythm monitor already flags any irregularities, and users will now get a weekly alert about the amount of time they spend in atrial fibrillation.

The software update is also designed to help users build a medication list, as well as remind them to take medicines.

Apple has also announced it will be introducing new security measures for iOS 16. These include a Safety Check in the setting apps that lets users revoke access to personal data like the location they had shared with other users. Users can also head to the Safety Check page to log out from iCloud accounts on other devices for extra safety.