For this episode of Insiders, our reporter Hans von der Brelie went to Lithuania, a Baltic state of just under 3 million people that feels threatened by neighbouring Russia.

We're not fighting alone - we're thousands and we can defend Lithuania

Lithuania, like its neighbours Latvia and Estonia, was occupied by the Soviet Union for five decades before it regained independence in 1991. It abolished conscription in 2008, four years after joining NATO.

But Russia’s intervention in Ukraine and its annexation of Crimea in 2014 spread fear across the Baltics, and today military service is back in Lithuania.

Veda Golovac and Vilius Siniauskas are part of this new generation of conscripts. They wear the same uniform, but come from very different backgrounds. Veda is a student, Vilius a bartender. His father is a native Lithuanian speaker. Her father is Polish and her mother Russian.

There seems to be less tensions around ethnic minorities in the country than in Latvia or Estonia. Still, we put the question to Veda: would it be a problem for her to defend Lithuania against any perceived Russian agression?

“No, it would not be a problem,” she said. “I would defend my native country: I was born in Lithuania, I grew up and studied here and now I’m in the army. Lithuania is my home country.”

Vilius chimed in: “In everyday life, many people stay together in communities, sometimes a bit closed: you have Russian speakers, Polish speakers, Lithuanian speakers – but here in the army, everyone is constantly mingling with each other and we just feel like we’re equal.” 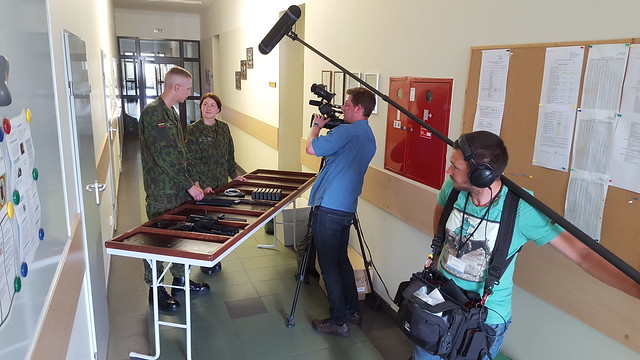 We also went to Vilnius to meet the Minister of Defence. Juozas Olekas was born in Siberia – where the Soviets deported his parents. His services have published a booklet preparing citizens “to survive war.”

The Russian Federation is clearly perceived as a threat.

“The aggression in Ukraine, their very aggressive behaviour over the Baltic Sea, their snap exercises around our borders… There is a will and a rhetoric that they can use their military forces, to solve, as they say, ‘their problems’ around their borders and outside their borders,” Olekas said.

“The NATO enhanced forward presence, I think, is a very good initiative to stop Russian aggression,” he added.

After reported air space violations by Russian jets and exercises by Russian soldiers, NATO opened offices in the Baltics, but also Poland, Bulgaria and Romania – staffed with experts in military logistics.

“NATO could – if asked by Lithuania – deploy 5,000 troops in a very short time frame, from 48 to 72 hours,” said Angelo Miguel Simoes, spokesman for the NATO Force Integration Unit in Lithuania.

Those troops would be the spearhead of NATO’s 40,000-strong rapid reaction unit, which could be deployed in the event of an attack against a NATO member state.

Danish Major Vibe Michelsen took us to a forest where troops train for this worst case scenario.

“Our mission has to been to train interoperability with our NATO partners so we can work together in groups and fight as one,” he explained.

While Russia periodically launches massive military manoeuvres deploying as many as 160,000 soldiers, NATO trains on a much smaller scale – 10,000 soldiers took part in its latest “Saber Strike” exercise in the Baltics. The Lithuanian part of the training is called “Iron Wolf.”

Sixteen of NATO’s 28 members have increased military spending, including Lithuania. And NATO is sending a new multi-national force of 4,000 troops to boost the defence of Poland and the Baltics. That’s four battalions, led by Canada, Germany, Britain and the United States.

Lithuanians fear that won’t be enough to deter an attack. But they would be able to slow one down, while NATO calls backup – and that should come quickly.

“For us it’s no longer a challenge to transport material and troops over long distances,” said Marc-Ulrich Cropp, Lieutenant Colonel in the German army. “We can send soldiers by plane, heavy weapons and vehicles by rail and special equipment by road.”

Sergei Kulikov is one of nearly 400 young Lithuanians who completed the “Iron Wolf” exercise – and their military service. He got a certificate for serving faultlessly. He’s a native Russian speaker, but when Lithuania reintroduced its nine-month military service, he was on board right away.

“I’m happy with my decision. I understood it’s up to every man to make a change for the country’s destiny. We’re not fighting alone – we’re thousands and we can defend Lithuania,” he said.

We followed Sergei as he said goodbye to his fellow conscripts and returned to where his family lives, in the Lithuanian countryside. His father Anatolii is an engine driver for the national rail company, and back in the day he did his own military service as a tank driver for the Soviet Union.

Asked what he thought of military service becoming compulsory again, Anatolii said it was “a good thing.”

“Everybody should do it. I see that young people don’t have work, they don’t find their place in society. Sometimes they’re spoiled. Young people should do their military service because the army is a good school for life.”

The Soviet Union is long gone and Lithuania joined NATO in 2004. In some families it’s still a sensitive topic that Sergei’s father doesn’t want to talk about.

But Sergei himself is perfectly comfortable with it. He even has a tatoo of the emblem of the Iron Wolf battalion on his chest. His dream? To join the Lithuanian army permanently and become a professional NATO soldier.