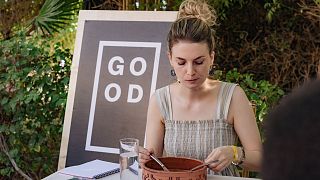 Although apprehensive, the cultivated chicken I tried was delicious - better than I remember chicken tasting.   -   Copyright  GOOD Meat
By Lottie Limb  •  Updated: 03/12/2022

I look down at the chicken on my plate nervously.

This is the first time I’ve eaten meat in seven years of being a vegetarian. But it’s also the cameras hovering behind my shoulder; the heightened music and watchful gaze of the people who made this meal possible.

I’ve been invited to try the latest brand of cultivated chicken - lab grown by food tech company GOOD Meat - while at COP27 in Egypt. We’re not inside the UN venue now, though. The table is set in the grounds of a five-star hotel in Sharm El Sheikh, five miles north of the climate summit.

My fellow diners pause above the chicken skewers too. The bravest dip in - and I follow with a once familiar bite.

What is cultivated meat?

Cultivated meat, like the chicken I ate, is made from animal cells. It’s a biologically identical product but grown in a bioreactor, not a farm.

Cells are sourced from eggs or living chickens and stored in a cell bank - so ‘cell x’ can, in theory, keep producing the same tissues over and over again. Inside a vessel (similar to a beer fermenting tank) the cells are immersed in a bath of amino acids, fats and vitamins - providing the same ‘feed’ an animal would root out in the wild.

The world’s first cultured burger was unveiled in 2013. GOOD Meat became the first company in the world to sell cultivated meat in 2020, after Singapore approved its ‘chicken bites’ for sale in restaurants, and it now delivers them too.

The US regulator permitted a different company to commercialise its lab-grown meat for the first time last month, and Qatar is poised to follow suit. The UK might “crack too”, but it’s likely to be a while before the EU gives its seal of approval.

The chicken that I ate in Sharm, with some delicious red lentil dahl soup and ‘poori’, was better than any chicken I remember eating in my teenage years.

Frankly I’ve always thought that chicken is a paltry concession for a bird’s life. I still crave a steak occasionally but chicken? Surely it’s much more about the sauce or styling than that bland white flesh. But I feel confident in saying that even finger lickin’ chicken lovers will be placated by this environmental and ethical upgrade.

It was followed by a dish of chicken skin - which had a distinct crunch amid cubes of frozen watermelon - and the pièce de résistance: grilled chicken. Having watched it sizzle on the barbeque in the November sun before pulling it apart with my fingers, it tasted succulent, like an argument winner.

And, having never loved it during my meat-eating days, that’s really as much as I can say about the chicken which was chicken.

Who is cultivated meat for?

A good meal is so much more than the food on your plate - and this one was especially memorable for the company and the conversations it sparked.

I am not GOOD Meat’s target audience, being perfectly content with plant-based protein substitutes.

One fellow diner had not eaten meat in 35 years. Her partner described himself as a “voracious meat eater, wrestling with the impact of meat on the planet” - the ideal cultured meat consumer.

GOOD Meat CEO Josh Tetrick himself grew up in “meat central in Birmingham Alabama” he tells us, so understands the “emotional” heft of animal cuts. In its communications, the start-up leans into this idea of the desire being human nature. “We will always eat meat,” the website declares. “To share the planet together, we have to do it differently.”

Why were we eating cultivated meat in Sharm El Sheikh?

Pudding, strawberry granita - “maybe in the future we’ll figure out chicken ice cream,” one of the entourage jokes - is followed by a moment of meditation. “It’s amazing how a different scene or space can really be cultivated, isn’t it?” says the clarinetist, before playing us out to Balinese Dolphin music.

It wasn’t a subtle comment - nothing about the afternoon had been, since stepping past the sign on the lawn welcoming us to “taste climate history”. In fact since the invite - extended not just on behalf of Tetrick but the Singapore Pavilion at COP27 - claiming the food “has been heralded by the UN Intergovernmental Panel on Climate Change [IPCC] as a transformative approach to reducing emissions.”

GOOD Meat said it got a special permit from the Egyptian government to launch its third version of chicken during COP27.

But folded neatly into the fortnight, how much was this dining experience in or out of COP? The garden of the luxurious Four Seasons villa felt like a world away from the summit centre, which did end up making climate history in the form of a fund for vulnerable countries.

Having eaten from poorly stocked food trucks for days, treating dozens of tired and hungry journalists to this exquisite meal was a PR masterstroke. But what does it matter if it left a funny taste in my mouth, if cultivated meat is such an important part of the solution?

“My primary goal is not for us to win,” Tetrick tells me. “I want us to win because I'm a human being and I have an ego and this is my company. But more than anything I want the world to be free of slaughtering animals and all the consequences of doing that.”

There are more than 90 companies in the lab-grown meat space, he says, and there’s various ways in which they work together to challenge the dominance of big agribusiness. Lobbying for the more appetising term ‘cultivated’ to be used in the US instead of ‘lab-grown’, for example.

Getting approval in Singapore has opened the window for other companies, he adds, and built regulation ‘scaffolding’ that other countries can adopt. Success for one also makes it easier for new food tech firms to raise the capital they need.

“I think where companies aren't collaborating right now - this includes us - is on the technology,” says Tetrick. GOOD Meat is working on increasing its vessels from around 10 to 70 feet tall - crucial for increasing production and driving costs down.

Designing a big enough impeller to mix the cells from the top is no mean feat. “If I shared the propriety design with the 90 other companies, it would increase the probability that they would be effective,” the CEO explains. “On the other hand, it would make it more challenging for me to raise additional capital because we’d lose our competitive advantage.”

Can we rely on this ecosystem of start-ups and venture capitalists to deliver?

One person who has studied the issue in depth and is now less sure is the journalist and author George Monbiot. When he began researching Regenesis, his barnstorming book on agriculture’s climate-wrecking ills and solutions, Monbiot expected lab-grown meat to be a big part of the answer.

But, he writes, “the more I’ve read about cultured meat and fish, and the more I’ve come to appreciate the phenomenal complexities involved in growing cells on a scaffold to make something that looks and feels and tastes like steak or tuna, the more I doubt this vision will come to pass.

“As the anticipated cost curves fail to materialise, the initial enthusiasms of venture capital will give way to frustration and disappointment. I doubt the money invested so far is patient enough to march through the hundreds of steps required to bring good products to the market.”

Tetrick concedes there’s still a “massive distance” to go. He wouldn’t say how much the chicken cost to produce, just that it was “more than quadruple” the $17 the brand’s chicken dumplings sell for in upmarket Singaporean restaurants.

Yet, he argues, “we now live in a world where this is being sold, which is a big step from a world where it wasn't commercialised.”

What are the alternatives to cultivated meat?

The IPCC didn’t single out cultivated meat as a transformative solution to agriculture’s colossal carbon footprint. Its Sixth Assessment Report this year placed it alongside cellular fermentation and plant-based alternatives as emerging food technologies which can bring about a substantial reduction in direct GHG emissions from food production.

Arguing that land use is the most important environmental metric - since land used for livestock means less land for biodiverse and carbon-rich ecosystems - Monbiot makes a convincing case for another technology: precision fermentation.

This is the process of brewing microbes rather than animal cells, which could be moulded into a vast array of products. Another challenging aspect of working with animal cells is that they only double every 24 hours, compared to 20 minutes for bacterial cultures. Sterility is therefore vital; as one expert told The Counter, “you’re going to crush the culture in hours with a contamination event.”

“Without looking more closely at the fundamentals,” the author writes, “we can’t know whether cultured meat is our salvation or an expensive distraction.”

My taste of ‘climate history’ in Sharm was, hands down, the weirdest meal of my life. Good weird? Definitely. But in this narrow window we have to put food on a climate-safe path, it remains to be seen whether it’s the food of the future and - to labour the metaphor - how many options we have left on the menu.