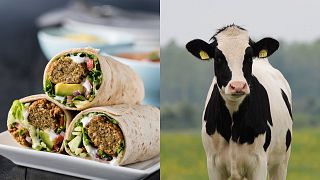 The University of Stirling student union will transition to '100 per cent plant-based catering' within three years.   -   Copyright  Canva
By Charlotte Elton  •  Updated: 29/11/2022

A Scottish University union has voted to go fully vegan by 2025 - the first UK student union to do so.

The University of Stirling student union will transition to '100 per cent plant-based catering' within three years. Half the menu at the union’s three cafes will be vegan by the start of the 2023-24 academic year.

The bold plan - passed in a vote earlier this month - is an attempt to tackle the climate crisis.

The motion was put forward by the Plant Based Universities campaign, a student movement supported by activist collective Animal Rebellion.

“The worst effects of climate breakdown are already being experienced across the globe and industries like meat, fishing and dairy are undeniably a part of that,” Plant Based Universities warns.

“Universities are where we get so much climate science from, and as such, they have a responsibility to listen to it.

“Plant-based catering on campus is the only future-proof option.”

Will the University of Stirling stay vegan?

A majority of students at the meeting voted in favour of dropping meat and dairy from the menu.

The veganism rule could theoretically be overturned by another motion - 127 students attended the first meeting, out of a student body of 17,000.

But the motion’s proposer Aaron Caulfield defended the union’s mandate.

“It is not in any way an unusual turnout for a Student Union meeting,” he told student newspaper The Brig.

“If it is not the view of the Student Union to go forward with this, it should make it known at the next meeting.”

“It’s fantastic to see the next generation taking control of their future and putting humans, nonhuman animals and the planet first,” he said in a statement.

“The Plant-Based Universities campaigners at The University Of Stirling are leading the way in tackling the climate crisis and creating a sustainable food system.”

How bad is meat and dairy for the planet?

Animal agriculture is a massive source of carbon emissions.

Food production contributes more than a third (about 37 per cent) of the world’s greenhouse gas emissions, with meat in particular causing about twice the emissions of other types of food.

Emissions from livestock represent 14.5 per cent of all man-made greenhouse gas emissions

Industrial meat is the single biggest cause of deforestation, as vast swathes of forest are cut down for grazing land.

If the world went vegan, emissions from food would decline by around 70 per cent, research from the University of Minnesota suggests.