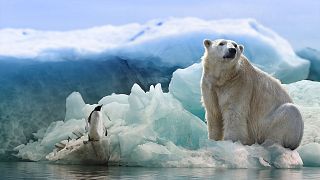 The architects of the 2015 Paris Climate Agreement have urged world leaders to secure a similar deal on nature at the upcoming COP15 biodiversity conference.

Global warming cannot be limited to 1.5 degrees Celsius without protecting nature, they warn.

As the COP27 United Nations climate summit enters its final few days, government officials and campaigners are now setting their sights on the high-stakes meeting for nature next month.

It will take place in Montreal, after host country China postponed the event four times due to the COVID-19 pandemic.

On Wednesday, the architects of the 2015 Paris Climate Agreement - which seeks to limit global warming to well under 2 degrees Celsius - issued a statement urging world leaders to secure a similar deal on nature.

"There is no pathway to limiting global warming to 1.5 degrees Celsius without action on protecting and restoring nature," says the statement signed by Laurent Fabius, Manuel Pulgar-Vidal, Christiana Figueres and Laurence Tubiana, who helped design the Paris Agreement.

COP15 will be an “unprecedented” opportunity to turn the tide on nature loss, they add.

At the COP15 talks scheduled for 7 to 19 December, national delegations will hash out a new global deal to protect plummeting wildlife populations worldwide and halt the continuing degradation of landscapes.

Why do campaigners want a Paris Agreement for nature?

The architects of the landmark climate deal are calling for a full-fledged "Paris Agreement for nature", under which countries set national conservation targets and routinely report their progress on meeting them.

They say that the climate and nature agendas are unavoidably “entwined”.

Climate change is fast becoming a primary driver of biodiversity loss, they explain in their statement. Humanity’s accelerating destruction of nature is undermining its abilities to provide crucial services, including climate change mitigation and adaptation.

Earth has seen five mass extinction events and scientists believe the planet's sixth is in progress now with animal and plant species vanishing at a rate not seen in 10 million years.

The world's wildlife crisis is driven by habitat loss and pollution, with climate change posing an increasing threat as global temperatures climb.

Without steep cuts to greenhouse gas emissions, as many as half of all species will be facing temperatures and conditions beyond their ability to survive by the century's end, according to research published in 2018 in the journal Science.

Those that can't migrate or adapt will perish.

The loss of forests and other vital ecosystems like coral reefs and seagrass beds will also leave the world with fewer natural forms of carbon sequestration.

Already, these "carbon sinks" absorb about half of the excess emissions humans are pumping into the air from burning fossil fuels.

"We are also seeing that biodiversity provides solutions to climate change, and that's why they need to be looked at together," says Elizabeth Maruma Mrema, executive secretary of the UN’s Convention on Biological Diversity.

What would a Paris Agreement for nature mean?

Scientists and campaigners are pushing for next month's COP15 conference to conclude with a "nature positive" agreement that commits countries to ensuring there are more wild spaces and creatures in seven years' time than there are now.

“Like the Paris Agreement, it must encourage countries to pledge and also ratchet up their action commensurate with the size of the challenge.”

They add that it must be inclusive, rights-based and work for everyone.

“ And it must deliver, through the whole of society, immediate action on the ground – our future depends on it.”

Campaigners and delegates say they want to see a strong cover statement on biodiversity come out of COP27 before they head to Montreal.