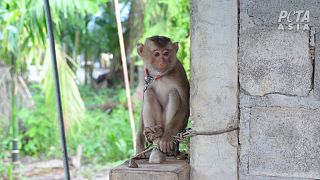 PETA is calling for a worldwide boycott of all Thai coconut products due to what it calls the “rampant” use of monkey labour.   -   Copyright  PETA
By Nicole Lin Chang  •  Updated: 16/11/2022

Monkeys in Thailand are being illegally obtained, chained and forced to pick coconuts for suppliers linked to dozens of top coconut milk brands, according to an investigation by animal rights activists.

Rights group People for the Ethical Treatment of Animals (PETA) is calling for a worldwide boycott of all Thai coconut products due to what it calls the “rampant” use of monkey labour in the industry.

They describe harrowing mistreatment, for example at so-called “monkey schools”, where monkeys are subjected to abusive training before being sold on to coconut pickers.

“PETA investigators saw endangered monkeys chained tightly by the neck when they weren’t forced to work and kept tethered in often flooded, trash-filled areas with little shelter from the elements,” says a statement from the organisation.

“A trainer was even caught on camera striking a screaming monkey, dangling him by his tether and collar, and beating him with a metal chain.”

What sort of monkey abuse is happening in Thailand?

In another instance, investigators saw a female monkey used for breeding kept chained alone in the sun, while other young monkeys were seen in cages.

A coconut picker told investigators that monkeys faced fatal risks performing their “jobs”, including being stung by hornets and falling from trees and breaking bones, says PETA.

“Some coconut pickers yanked on ropes tied to the animals, reportedly causing monkeys to fall,” adds the organisation.

Another worker told PETA investigators that the monkeys would be “forced to pick coconuts for more than a decade before being ‘retired’ - chained up for the rest of their lives”.

Other monkeys may be abandoned in the forest, even though they lack the skills needed to survive on their own after being bred in captivity or kidnapped as juveniles, says PETA.

Which companies are linked to monkey labour?

Brokers for HelloFresh's coconut milk suppliers showed investigators the monkeys chained up without access to adequate shelter, says PETA, which has also published photos and video from its investigation.

The organisation is calling on HelloFresh customers to cancel their membership until the company stops sourcing Thai coconut products.

In a statement to Euronews Green, HelloFresh said it has written confirmation from all its suppliers that they do not engage in such practices.

“HelloFresh strictly condemns any use of monkey labour in its supply chain and we take a hard position of not procuring from suppliers or selling coconut products which have been found to use monkey labour,” says the company.