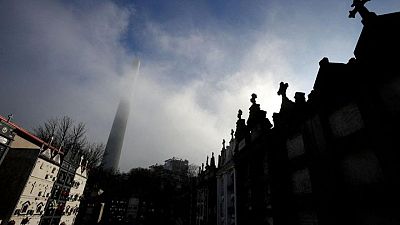 <div> <p>By Kate Abnett</p> <p><span class="caps">BRUSSELS</span> – The European Union plans to raise its target to tackle global warming under the Paris climate agreement, although the upgrade is unlikely to happen in time for this year’s U.N. climate summit, according to a draft document seen by Reuters. </p> <p>A draft of the EU’s negotiating mandate for the COP27 summit in November, seen by Reuters, said the 27-country bloc intends to update its “nationally determined contribution” (<span class="caps">NDC</span>) – the contribution each country makes towards the 2015 Paris accord to prevent disastrous climate change.</p> <p>The EU, the world’s third-biggest emitter, has pledged to cut its net emissions by 55% by 2030, from 1990 levels – one of the most ambitious goals among major economies.</p> <p>EU officials hope it will be possible to nudge that goal a few percentage points higher. That’s because the bloc’s package of climate policies was designed in July 2021 to deliver the 55% emissions target – and parts of it have since been made more ambitious.</p> <p>The EU “stands ready to update its <span class="caps">NDC</span> in line with the final outcome of the ‘Fit for 55’ package in due time”, the draft said, referring to a package of climate policies EU countries and lawmakers are negotiating.</p> <p>The draft could still change before EU countries approve it in October.</p> <p>In May, Brussels hiked proposed EU targets to expand renewable energy and increase energy savings, to attempt to end countries’ reliance on Russian fuels following Moscow’s invasion of Ukraine.</p> <p>The higher targets could lead to deeper emissions cuts, if EU countries and lawmakers approve them alongside the other proposals, which include a 2035 phase-out of fossil fuel cars. Some countries have also attempted to weaken proposals during negotiations.</p> <p>EU negotiators are not expected to finish the package until next year, making it unlikely that the EU could confirm a new target before COP27 in November.</p> <p>Some experts said making clear that the EU is planning a higher target would still increase pressure on other emitters. All countries face a U.N. review of their targets and how they intend to meet them in 2023.</p> <p>“Taking this step would put the EU further ahead as a global climate leader,” said Tom Evans from think-tank E3G.</p> <p>However, Europe and other rich emitters are also set to face increased pressure at COP27 from vulnerable countries demanding funds to address irreversible damage climate change has inflicted on poor countries.</p> <p/> </div>