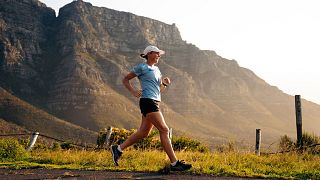 For most people, running a single marathon would be an incredible achievement.

Australian businesswoman and advocate Mina Guli plans to run 200 in the space of a single year.

On 22 March - World Water Day - the 52 year old laced up for the first run of her epic #RunBlue challenge, a bid to raise awareness about the global water crisis. She’s since completed 127 runs, each 42.195 kilometres in length.

By the time she completes the last leg in March 2023, Guli will have run 8439 kilometres. That is the equivalent of jogging from Morocco to northern Estonia and back again.

“The one thing we all have in common [is that] we all need water to survive,” she says, speaking from Sharm el Sheikh, the Egyptian resort town hosting COP27.

“[The water crisis] is not a problem that’s going to go away, this is just going to get worse, every single day.”

So just how bad is the problem - and what can we do to address it?

How bad is the water crisis?

She first became interested in the issue while working as a lawyer in Melbourne, but quickly became frustrated at the lack of attention the subject received.

“I got involved in water because I was absolutely horrified that we have such a major global crisis on our doorstep affecting literally billions of people … and we’re not talking about it,” she says.

“Why is water not making front page news? Deforestation does, and yet our wetlands are disappearing three times faster than our forests.”

In many countries, taps, wells and pipes delivering safe water do not exist. One in ten people - nearly 800 million in total - lack access to clean water. Every day, more than 800 children below the age of five die from diarrhoea caused by contaminated water and poor sanitation.

By 2050, around 60 per cent of the world’s inhabitants will likely face water scarcity.

Water holds societies together. And without it, things start to fall apart.

“We have a major water issue that goes far beyond toilets and taps, and deep into supply chains, societies and economics,” Guli warns.

In other parts of the world, the problem isn’t too little water - it’s too much. According to a WaterAid report, 650,000 pregnant women in flood-affected areas of Pakistan lack access to sanitary reproductive care.

Why is Mina Guli running 200 marathons?

Guli hasn’t always been an athlete. In fact, she dodged school sports as a kid, retreating into schoolwork and music.

But the determined businesswoman decided to use marathons as a way to force people to sit up and take notice of the water crisis.

Like her earlier feats, the #RunBlue challenge is a way of platforming the voices of the people who are worst affected by the water crisis.

During her runs, Guli has met women who walk miles to fetch water, Kenyan children who stay home from school to wait for water truck deliveries, and Bedouin herders who have gone “days without access to water.”

“[They] say ‘I fear that my children will become the first water refugees.’ These are real people's lives,” she says.

“One of the things I want to do through running is to take these stories, life them up and put them into environments like this (COP27).”

What can we do about the water crisis?

Solutions to the water crisis need to be applied systematically, Guli says.

“The vast majority of water used by each of us is actually outside our homes,” she explains.

“10 per cent of water that’s used across the board, on average, is used in domestic household consumption… (but) the vast majority of water is used for the power we use, the food we eat, and the clothes we wear.

“My outfit would have taken more water to make than all the water you drink before you’re 40 years old.”

To encourage this sustainable solution, the #Runblue campaign is targeting businesses.

The team hope to get 200 companies – one for each marathon – to assess their water risk, and reduce their usage through a concrete action plan.