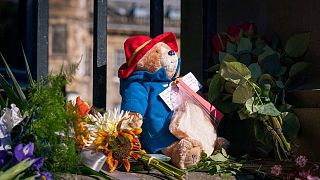 Queen Elizabeth II’s death has triggered a huge chain of event-planning as the UK moves through an 11-day period of mourning.

Though every stage has been secretly mapped out for years, there is still space for the British public to go off-script. Some people have expressed their grief by leaving Paddington Bear toys outside the Queen’s palaces.

Her Majesty came to be closely associated with the fictional character after a sketch filmed for her Platinum Jubilee celebrations in June depicted the pair sharing afternoon tea. His “Thank you, for everything” remark appears to sum up many peoples’ feelings towards their longest-serving monarch.

But as replica bears, marmalade sandwiches and plastic-coated flowers pile up at memorial sites, sustainability issues are not going unchecked.

It’s small fry compared to the environmental shifts around the royals - from the Queen’s green legacy to King Charles’ ascension - and the climate policies being pursued (and abandoned) by new UK Prime Minister Liz Truss.

But here we take a look at how eco-conscious rules are entering into the biggest, and most expensive, state funeral most Britons have ever seen.

What is happening to flowers left for the Queen?

Many people have been moved to pay their respects for the Queen by leaving flowers and gifts outside Buckingham Palace and other residences since her death on Thursday 8 September.

But after an outpouring of teddy bears, corgi dog soft toys and balloons, mourners are being gently asked to consider the environmental impact of their offerings.

Flowers left at Buckingham Palace are being moved to a floral tribute garden in nearby Green Park at the end of each day, but ‘non-floral objects’ like are not welcome.

“In the interests of sustainability, we ask visitors to only lay organic or compostable material,” says the Royal Parks of London.

“The public will be asked to remove all wrapping from floral tributes and place these in the bins provided. Removing the wrapping will aid the longevity of the flowers and will assist in subsequent composting which will start between one week and a fortnight after the date of the funeral.”

Some civic-minded members of the public have been working to remove the plastic wrapping from flowers in Green Park themselves, videos shared online show.

The Royal Parks adds that from 26 September on, flowers will be taken to Hyde Park nursery for composting in nearby Kensington Gardens.

“This organic composted material will be used on shrubberies and landscaping projects across the Royal Parks.”

If you’re looking to leave an even more sustainable gift, the UK government is also directing people to the many charities the Queen patronised. Environmental organisations listed include Surfers Against Sewage, Fauna and Flora International and the Soil Association.

Why are world leaders banned from travelling to the Queen’s funeral by private jet?

As environmentalists know, transport is one of the sectors most responsible for global warming - accounting for one-fifth of CO2 emissions worldwide.

It’s likely, then, that the most significant mitigation of climate costs around the funeral comes from the Foreign Office asking world leaders to leave their private jets at home.

Foreign heads of states and their partners are being asked to arrive on commercial flights, and are banned from using helicopters to get around the capital, according to documents seen by Politico.

They have also been told not to use their official, private cars to attend the service on 19 September. Instead, dignitaries will be bussed from a site in London to Westminster Abbey.

Logistics and security appear to be at the heart of it. “Multiple and comprehensive layers of security will be in place across London,” a Foreign, Commonwealth and Development Office (FCO) document states.

Private jets are not banned outright. The department warns that Heathrow Airport will not be available for private flight arrangements or aircraft parking. Leaders set on travelling by private jet should head for “less busy” airports around London, it adds.

But the use of helicopter transfers between airports and venues is forbidden “due to the number of flights operating at this time.”

Space constraints at Westminster Abbey mean that only one head of state and their partner per country are invited, further curbing air travel before the funeral. But many people from around the world are expected to travel to London in the coming days, to catch a glimpse of the ceremonies.

Under Operation London Bridge plans, the Queen’s body was expected to be transported from Edinburgh to London by Royal Train, but is now being flown south.