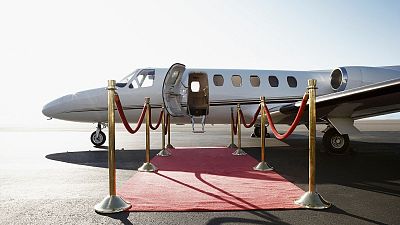 Private jets will be bringing some delegates to the climate conference.   -   Copyright  Getty/Jupiterimages
By Lottie Limb  •  Updated: 06/10/2021

The private airport that Extinction Rebellion protesters blocked last week is on the official COP26 list of places to fly to.

Delegates arriving in the UK for the climate summit from ‘red list’ countries are being directed to seven airports, including two that cater exclusively to private jets.

Farnborough Airport in Hampshire was targeted by XR activists on Saturday, who are calling for an end to the polluting flights chartered by “the world’s super-rich elite of celebrities, oligarchs and business leaders”.

The demonstration - which has been favourably compared to Insulate Britain’s motorway blockages - threw a spotlight on the expensive airport which 30,000 private jets pass through each year.

Yet an official COP26 guide for delegates backs the port, as well as private Biggin Hill Airport in London.

Heathrow, Gatwick, London City, Bristol and Birmingham are the other permitted destinations for participants who have been in any red listed countries or territories in the previous 10 days.

Heathrow, Gatwick, London City, Bristol and Birmingham are the other permitted destinations for participants who have been in any red listed countries

This is in line with the UK Government’s list of designated airports for managed quarantine, which has been updated on the website to include Newcastle Airport.

But climate campaigners have pointed out the irony of the instructions. Daniel Willis, climate campaigner at Global Justice Now, said: “Boris Johnson claims to be a climate leader, but he only seems interested in a COP26 that protects the interests of the wealthiest.

“Activists from frontline communities have faced endless visa and vaccination delays, preventing many from getting to COP26. And yet the British government is encouraging delegates to fly in on climate-busting private jets.

“It’s shameless pandering to the rich and will only lead to an exclusive, one-sided COP that marginalises the global south.”

How are world leaders getting to Glasgow?

Boris Johnson was scorned for jetting from London to Cornwall for the G7 summit in June. His 49-minute trip saw the UK Prime Minister contribute well over 100kg of CO2 to the Earth’s atmosphere.

His 49-minute trip saw the UK Prime Minister contribute well over 100kg of CO2 to the Earth’s atmosphere.

The PM is set to fly to November’s summit on a “green flight”, according to a travel proposal seen earlier this year. The plane’s green credentials will come from using Sustainable Aviation Fuels (SAF), biofuels from plants or waste, which are not without an environmental cost.

The UK COP presidency was reportedly looking at ways to fly up to 65 heads of state into three Scottish airports by making SAF more widely available.

Providing a “positive story of travel to and from the COP” was noted as a key outcome on a Department for Transport document dated from March.

COP26 attendees are unlikely to achieve such a positive story as Greta Thunberg’s epic 14-day journey across the Atlantic to attend the UN Climate Action Summit in New York in 2019.

The Swedish activist set the bar high for sustainable travel. And security concerns mean that private flights are seen as the only feasible option for world leaders like US President Joe Biden.

But what kind of message does listing private airports for all delegates, including industry heads, set for the most pressing of COPs?

A COP26 spokesperson said: "If we are to deliver for our planet, we need all countries and civil society to bring their ideas and ambition to Glasgow. Sustainability is at the core of COP26. The UK will be offsetting all carbon emissions associated with running the event and working closely with sustainability experts to do so.”

The organisers added that they had encouraged all delegates to consider low-carbon travel options and advised on the use of train travel.