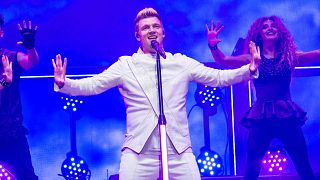 Backstreet Boys member Nick Carter is being sued for sexual battery after an alleged incident with a teenage girl in 2001, during the boy band’s Black & Blue concert tour.

According to the lawsuit, accuser Shannon Ruth, who was 17 at the time, was picked out by a 21-year-old Carter from a line of fans waiting for autographs at the Tacoma Dome in Washington, and was invited to join him on his tour bus.

He then allegedly offered her "VIP juice", a red coloured drink she believes had alcohol in it, then took her to the bathroom, pulled down his trousers and told her to perform oral sex on him.

Ruth, who lives with autism and cerebral palsy, also claims the singer instructed her on how to proceed despite being in tears.

The report then reads that Carter led her to a bed and continued to sexually assault her and called her a "retarded little bitch" while she "begged him to stop".

“Carter tried to scare me into silence,” claims Ruth, saying he told her “he’d turn people against me because he was Nick Carter and had the power to wreck my life.”

According to the documents, Ruth was a virgin at the time and had been infected been HPV (Human papillomavirus infection) from the alleged incident.

“The last 21 years have been filled with pain, confusion, frustration, shame, and self-harm that are a direct result of Nick Carter raping me,” Ruth said tearfully at a press conference with her lawyer Mark Boskovich in Beverly Hills.

"Just because Nick Carter is a celebrity does not mean that he's excused from his crimes. No celebrity is above the law. He took away my childhood innocence, but he will not take away my strength and truth," she added.

She is now suing Carter for sexual battery and intentional and negligent infliction of emotional distress.

Carter has denied the allegations through a statement released by his team.

“This claim about an incident that supposedly took place more than 20 years ago is not only legally meritless but also entirely untrue,” the statement from lawyer Michael Holtz reads.

“Unfortunately, for several years now, Ms. Ruth has been manipulated into making false allegations about Nick – and those allegations have changed repeatedly and materially over time. No one should be fooled by a press stunt orchestrated by an opportunistic lawyer – there is nothing to this claim whatsoever, which we have no doubt the courts will quickly realize.”

A source close to Carter told TMZ that the singer is “focusing on his family and mourning the death of his brother [Aaron Carter]” and called the accusations “categorically false.”

This isn't the first time Carter has been accused of sexual assault.

In 2017, Melissa Schumann, a former member of the pop group Dream, stepped forward and publicly accused Carter of sexually assaulting her in 2003, when she was 18-years-old and he was 22.

The allegations were denied by Carter, who said in a statement: “I am shocked and saddened by Ms Schuman’s accusations. Melissa never expressed to me while we were together or at any time since that anything we did was not consensual … This is the first that I am hearing about these accusations, nearly two decades later."

Prosecutors investigated Schuman’s claim which was ultimately rejected over the statute of limitations.