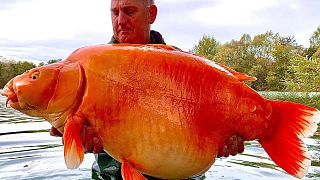 A UK fisherman has become angling royalty after meeting his nemo-sis and reeling in a nearly 70-pound (approx. 32kg) monster goldfish, which could be the world’s largest of its kind.

Andy Hackett, 42, landed the record-breaking 67.4-pound fish called The Carrot - named for its... can you guess it?... orange appearance - while fishing at Bluewater Lakes in Champagne, France. It took him over 25 minutes to nab the specimen.

“I always knew The Carrot was in there but never thought I would catch it,” said Hackett, a Worcestershire-based company director.

'”I knew it was a big fish when it took my bait and went off side to side and up and down with it. Then it came to the surface 30 or 40 yards out and I saw that it was orange. It was brilliant to catch it but it was also sheer luck.”

The fish, who had previously eluded capture, is actually a hybrid species of leather carp and koi, and is reportedly 20 years old. It was put in a lake at a fishery in France run by Brit Jason Cowler.

“We put The Carrot in about 20 years ago as something different for the customers to fish for. Since then it has grown and grown but it doesn't often come out. She is very elusive.”

For those of you worrying, the fin-tastic Carrot was released back to the waters following the catch and a few cheeky pics for posterity.