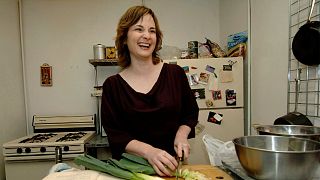 Julie Powell, the food writer best known for the film 'Julie & Julia', died on October 26 at the age of 49, her family announced late on Tuesday.

Powell rose to fame thanks to her attempt in 2002 to cook all of the over 500 recipes included in Julia Child's 1961 book 'Mastering the Art of French Cooking', which she documented in her blog the Julie/Julia Project.

At the time, Powell was a 29-year-old aspiring writer working as a secretary in New York, trying to change her life. Her blog became a sensation online, reporting some 400,000 total page views before the year Powell had given herself to close her project up, according to the online magazine Salon.

Twenty years ago, the kind of blogging that Powell did was a complete novelty, with readers tuning in to find out if the untrained cook was keeping up with her ambitious goal, as well as to learn what was going on with her life, marked by the everyday struggles of being an adult on the verge of turning 30, with all the anxieties and doubts this usually comes with.

Her project was noticed by journalist Amanda Hesser, then a writer for The New York Times, who wrote about Powell and her "race to master the art of French cooking". From there, interest in Powell and her project exploded: she was offered the opportunity to write a book about it, and her 2005 work 'Julie & Julia: 365 Days, 524 Recipes, 1 Tiny Apartment Kitchen' was an instant hit.

The book later inspired director Nora Ephron to make a film about her, the 2009 'Julie & Julia' starring Meryl Streep as Child and Amy Adams as Powell.

In the same year as the film came out, Powell published her second book, 'Cleaving: A story of Marriage, Meat and Obsession' where she talked of having an affair while being married and how getting an apprenticeship at a butcher shop during that time, in 2006, offer her a place to escape her crumbling relationship with her husband.

She is survived by her husband Eric Powell, who said Julie died of cardiac arrest in her home in upstate New York.

Her death has been mourned by food critics and bloggers across the world, with New York Times food reporter Julia Moskin saying it was "sad news" and journalist Doug Mack calling it "awful news."

"Julie Powell's writing voice, embrace of history, and willingness to show her mistakes and *lack* of expertise were all influential for many writers, including me," Mack wrote on Twitter.

"I was shocked to learn this morning of the passing of Julie Powell, the original food blogger. Cooking through Julia Child's books, she made Child relevant to a new generation, and wrote about cooking in a fresh, conversational, this-is-my-real life tone that was rare back then," wrote Deb Perelman of the food blog the smitten kitchen on Twitter.

"Julie Powell was an inspiration to my generation of food bloggers, and was hilarious and kind in our interactions, especially when discussing our home state of Texas. Sending my condolences to her family and friends," wrote food blogger Lisa Fain, founder of the Homesick Texan, on Twitter.