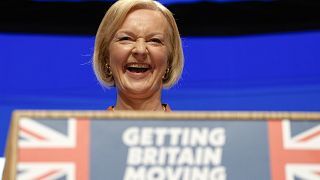 The Prime Minister of the UK, Liz Truss, walked on stage at a conference to applause from her party members and an uplifting backing track.

It was a scene that made immediate sense. The deeply unpopular prime minister who has been in the job barely a month and managed to tank the UK’s economy would only be so thoroughly applauded by her similarly inept peers.

And the tune an unpopular prime minister would walk onto should similarly resemble her delusional aspirations. The 1993 track ‘Moving On Up’ by M People is a paean to all things hopeful and positive.

While Truss insists on pretending her government’s choices are nothing but aspirational and positive, much of the public would disagree, including the writers of ‘Moving On Up’.

The Manchester group’s founder Mike Pickering took to Twitter immediately upon hearing of Truss' use of the tune.

no permission given for that we're very angry

He wrote they had “no permission given for that we're very angry” before adding that “apparently we can't stop Truss walking out to our song, very weird!”

So apparently we can't stop Truss walking out to our song, very weird! So sad it got used by this shower of a government. BTW Truss labour used it with permission in 90's. I don't want my song being a soundtrack to lies.

Pickering did note that the opposition, the Labour party had previously used the track in the 90s with the band’s permission and that he didn’t want his song “being a soundtrack to lies.”

Speaking to the BBC, Pickering also noted how it was clear Truss hadn’t “bothered to read the lyrics” as the song refers to taking a “sip from the devil’s cup”.

“I don't think they think in any depth,” he quipped.

It’s not the first and by no means will it be the last time that a politician has walked on stage to a song the original artist doesn’t condone.

Here are some of the most egregious moments from recent history.

Who else could be the king of ruffling musician’s feathers than the deeply divisive Donald Trump?

Across his limp single term presidency, he managed to annoy the artists behind basically every song he walked out to.

The list is pretty long, with an entire Wikipedia page dedicated to the artists opposing Trump's use of their music.

Take a breath. You ready?

Told you it was a lot.

The Rolling Stones were one of the most annoyed when Trump used their song ‘You Can’t Always Get What You Want’ at a campaign rally.

They issued a cease and desist legal letter and signed a letter alongside even more artists like Sia, Lorde, Pearl Jam and Alanis Morissette to try to stop US politicians using their music without asking permission.

“Being dragged unwillingly into politics in this way can compromise an artist’s personal values while disappointing and alienating fans – with great moral and economic cost,” the letter by the Artist Rights Alliance said.

Among the endless names of artists who disagreed with Trump’s politics was Bruce Springsteen. But Trump isn’t the first American president to get Springsteen’s ire.

Ever since Springsteen wrote his classic ‘Born in the USA’, politicians who only have the attention span to read the title have misconstrued it as a nationalist anthem.

The 1984 single is an anti-Vietnam war song that tells the story of a soldier packed off to war, only to find a country that is met with dire circumstances upon his return home.

The protest song's ironic chorus is rarely read as such by right-wing politicians who have walked on to the tune.

Springsteen’s song was first trotted out by the Reagan campaign. He then disavowed the use of the song for Bob Dole in 1996, Pat Buchanan in 2000, and most recently Donald Trump.

You’d be forgiven for thinking politicians using music they don’t have permission to is a US or UK problem. Don’t worry, everyone's at it.

Then-French president Nicolas Sarkozy added his name to the list when he used MGMT’s ‘Kids’ at multiple UMP rallies and even on their website in 2009.

MGMT were particularly irritated by Sarkozy’s push against music filesharing and a clamp down on copyright infringers at the time. Quite the irony, given that Sarkozy used the song without their permission.

The band managed to successfully sue the French president and get an undisclosed sum in compensation.

Swedish band ABBA took umbrage when their hit ‘Mamma Mia!’ was taken by the far-right Danish People's Party (DF) in 2010.

The youth wing of the party didn’t just use the tune though, they even changed the lyrics, turning the title to ‘Mamma Pia’ in honour of their leader Pia Kjaersgaard.

“Firstly, you cannot just rewrite songs as you like and secondly we want them to understand that we have absolutely no interest in supporting their party,” Benny Andersson said.

“ABBA never allows its music to be used in a political context. This is something that we have pointed out to the Danish People's Party,” he added.

Although ABBA said they were seeking legal advice, it was later confirmed that no legal action would be taken as an agreement was made and DF stopped using the song.

The Rolling Stones don’t just get annoyed with Donald Trump. Over in Europe, they voiced their displeasure when Angela Merkel used their song ‘Angie’ in 2005 without prior permission.

In 2013, the German band Die Toten Hosen weren’t happy with the Christian Democratic Party (CDU) using their song ‘Tage wie diese’ (Days like these) in their election campaign.

While the CDU did refrain from playing it anymore at their rallies, they did put it on when they won the election. But this time Die Toten Hosen had given their approval, as the song was meant “for those kinds of moments, when you want to party.”

You be the judge: