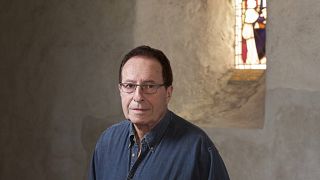 Whenever Peter James prepares to publish a novel, it is easy to sense that British book shops are readying for a rush on their stocks.

He is one of the country's best-selling crime writers. Every instalment of his hit Detective Superintendent Roy Grace series -- now a TV drama -- is hotly anticipated by fans eager to find out the latest perils and pitfalls facing their beloved bobby.

Well, the wait is almost over as James is set to release his latest book, 'Picture You Dead', this month.

This time, DS Grace is forced to delve into the murky and wondrous world of fine art - where greed, deception and violence can run amok.

Euronews Culture spoke to James about how a burglary was "one of the best things that happened" to him, how he survived getting shot at in Moscow and the psychological impacts of crime on the police, and the people who write about it.

Euronews Culture: What kind of research did you do before writing this book? Did you immerse yourself in the art world? Or was it already quite familiar?

Peter James: I have been wanting to write about the art world for a long time. It's always fascinated me. The father of one of my best friend's in school was a big London art dealer and some of the stories he told me always intrigued me.

EC:  So it sounds like you very much enjoyed writing this novel?

Peter James: I love to write about what my publishers call the everyday sinister stuff that can happen to any of us. I think the dream for a lot of people -- as it has been for myself and my wife -- is to go to a car boot sale and pick up something that might change your life.

EC: Do you think the art world lends itself well to crime fiction?

Peter James: I think it does. Wherever you’ve got big money … and when people have got paintings worth millions, obviously the temptation for theft and skullduggery is there. It's fascinating. A great art dealer mate of mine said that the big auction houses in London reckon that around 80% of the paintings they get offered are fake.

EC: What do you think people like about the genre of crime fiction? Why do you sell millions of books?

At another level, in a world that is always dangerous, crime fiction provides a safe thrill. You go through an adventure, you get scared, you might see some gruesome murders. But at the end of the book, the detective will hopefully have solved the crime and restored some kind of order. After closing the book you may feel a little bit more comfortable about the world.

On a deeper psychological level, we are all genetically programmed to survive. Part of the interest in reading crime fiction, particularly murder or any violent crime, is what can I learn from this? What can I take away that's going to save my life and protect my family?

EC: How do you construct these puzzles in your mind? It must be quite a difficult and complicated process.

Peter James: Good question. I was very lucky. I originally started writing spy thrillers, but they didn't sell well. I got really despondent. But then we got burgled, which turned out to be one of the best things that ever happened to me, because this young detective saw all my books and said to me if you want more research, give me a call.

We eventually got invited to a barbecue at the house and a dozen of their friends were there, all police officers, and I just started talking to them. I thought, wow, you guys see more human life in a 30 year career than anybody.

When they realised I was genuinely interested and not just out to get a story I could flog to the local paper, they [the police] started inviting me out to come spend a day on patrol with them. It got to the point in the early 1990s when I was almost a trusted member of the police. They’d phone me up saying I am doing a raid tomorrow. Do you want to come with us? They’d sneak me into a crime scene. Then I started writing psychological thrillers, putting the police more and more into them.

EC: Crime can be a dark and macabre thing. Does immersing yourself into this world have an effect on you? Has it changed your own mind and how you think?

Peter James: I think I’d probably make a good detective. But I am not that brave. You have to be brave to be a brave cop. One question I ask every police officer I meet is: do you think you changed over the course of your career? Every single one says yes. They say they have become more cynical of human nature and more suspicious of people. The police have a mantra, ABC, assume nothing, believe no one and check everything.

EC: So has some of that rubbed off on you?

Peter James: Absolutely. Whenever I read a news story that somebody’s husband, son or wife is dead, I usually think the partner’s done it. Fact is 90% of the time people who are in a relationship are murdered by their other half. I do have a suspicious mind. Not in a bad way, I am just always looking for the next story.

EC: Have you become more empathetic towards the police? Do you have more admiration for their work?

Peter James: Enormously. I have been out many times with the Met [the UK's largest force - London's Metropolitan Police], police in New York and Moscow, which was quite interesting because I got shot at. At the car, not at me personally. But it made me think I was maybe taking my research a little bit too far.

I have immense respect for the police. Invariably there are some bad apples – as there are in so many organisations – but the vast majority of police join the force, not because it's well paid, but because it is one of the few careers where you can really make a difference to people's lives. It is also dangerous. When a police officer leaves home in the morning, their partner doesn't know if they are going to come back home with the same face that night? Are they going to come back home at all?

A former commander of the Met said police are ordinary people doing extraordinary jobs, but wearing a uniform doesn't protect you from trauma.

EC: With the scandals and negative publicity surrounding the police in the UK at the moment, do you think your novels help improve their public image?

Peter James: Yeah, I really do. Equally, I don't write about the police with rose-tinted spectacles. I have to show a kind of balance. I try to show them warts and all.

EC: You’ve written a novel every year for nearly 20 years now. Are you ever going to stop?

Peter James: It's full-on, but I love it. I don't treat writing like work. People often ask me if I am ever going to retire and I say, well, if I retire, I’d write a book. So there’s not much point. I remember Wilbur Smith being asked the same question and he said when they finally put me in my coffin, just before they close the lid, a hand will come out of the side and write: the end.

'Picture You Dead' by Peter James will be published on 29 September. It can be pre-ordered here.