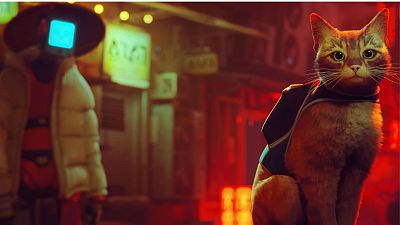 Hit indie game Stray is a success not only for gamers but also cats worldwide   -   Copyright  BlueTwelve Studio
By Jack Ramage  •  Updated: 08/08/2022

First, there was Goat Simulator, an open-ended third-person perspective game in which the player controls a goat. Then, Untitled Goose Game, the 2019 puzzle stealth game in which players control a goose who bothers the inhabitants of an English village.

And now we have Stray, which allows you to control a stray cat.

The choice of protagonist makes sense, as felines have long reigned as the undisputed rulers of the internet: from the earliest memes to cat-related TikTok, we’ve long relied on our furry friends to give us that much-needed hit of serotonin.

Stray, which follows a cat protagonist set in a robot-populated future, hasn’t just received great reviews for its gameplay and story – it’s created a viral trend that has seen real-life cats enthralled by what they see.

More importantly, it’s allowed us to press paws to reflect on the real-world issues in society.

A hit with cats (and their humans)

Credit goes to the French development team at BlueTwelve Studios, who perfected the movements and mannerisms of a cat down to the last meow.

Cats seem to agree. Since the game launched on July 19, countless viral clips have circulated on social media of cats reacting to the game.

Check them out below:

According to the cat specialist website, BetterWithCats, this is because cats also see images on screens – even if they perceive them differently compared to their human owners, with less detailed colours.

This means that even if cats probably recognize that the images they’re seeing aren't real, they can easily become confused - if not mesmerized - by their digital counterparts.

If providing multiple hours of entertainment for humans and felines wasn’t enough, the game has gone on to spark some charity fundraising.

Initially reported by AP, Stray’s publisher, Annapurna Interactive, as well as streamers and members of the online community, have facilitated countless events to fundraise for animal shelters, animal rights charities and other cat-related non-profit organizations.

Ahead of the game’s launch, Annapurna gifted copies of the game to Nebraska Humane Society, who raffled them off to fans.

In further efforts to raise money for animal causes, Annapurna also rented out Meow Parlour, a cat cafe and adoption centre based in New York City. The pop-up event allowed visitors to come in and play the game, surrounded by feline friends. The publisher also donated $1000 (approx. €979) to the institution.

“It definitely brought us exposure online, and from visitors who didn't know about the place,” says Emilie Legrand, who works at Meow Parlour. “[It made for] good opportunities to talk about adoption – we also had rules to ensure the wellbeing of the cats. Everyone was very considerate.”

“In the US, where vet costs are very high, access to low-cost neutering / spaying is a big issue – which leads to cat overpopulation and unnecessary suffering,” Legrand continued. “Especially now with ‘kitten season’, we have a lot of people reaching out because they find litters of kittens and shelters are full.”

“Annapurna was very keen on focusing on adoptions, and the well-being of our cats," she told Euronews Culture. "We’re very excited about the partnership, not just because of the game itself but because our values aligned. It was a great opportunity to do something fun and at the same time useful.”

Fundraising has also taken place on a grassroots level, with streamers across the globe playing Stray for donations.

The largest no-kill animal rescue and adoption organization in the world, North Shore Animal League America, said they had received over $800 (approx. €780) from streamers raising funds through a campaign.

Another streamer, who goes by the name TreyDay1014, teamed up with Nebraska Humane Society to help them raise over $1,500 (approx. €1,400) through a four-and-a-half-hour Livestream.

"One of the big things we've seen over the last few years in the industry is that video games companies have become much more aware that their games are platforms,” according to George Osborn, co-chair of the UK video games industry charityGamesAid, which supports disadvantaged young people across the UK.

“They’re making sure that they are commenting on some of the bigger issues and trying to help people out.”

"Companies have woken up and realized that they have this ability to reach potentially huge numbers of players in the game – but also in all the communities around them, through social media and changing discourse,” Osborn told Euronews Culture. “They have understood the value of actually going out and speaking the language that their communities want to hear.”