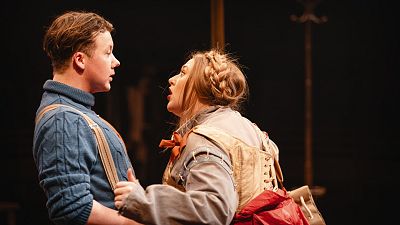 Shakespeare's As You Like It sets up a dynamic between city and country. Two rival courts that each embody the characteristics, atmospheres and values of opposing ideologies.

It seems strangely apposite then, that controversy has blown up over a social divide relating to a production of the 1599 comedy.

According to York's Theatre Royal, where a production of As You Like It performed by theatre company Northern Broadsides is being staged, an audience member requested a refund on the grounds of their objection to the northern English accents being used by some of the characters.

While many will feel this is much ado about nothing, it has blown up on social media and stands as an unusual response to theatre, particularly when the production itself is in the north.

Laurie Sansom, Artistic Director and CEO of Northern Broadsides responded in a statement sent to Euronews.

“I find it bizzarre that some people still feel it’s inappropriate for northern actors to deign to speak Shakespeare’s words. We’re all about making bold irreverent work, and celebrating northern talent and Shakespeare’s language," he said.

Shakespeare himself came from the English Midlands and would have likely had a regional accent. The idea that the received pronunciation Shakespeare that became the norm for most of the 20th Century is somehow the correct way to do it, has no basis in reality.

"Funnily enough no one was speaking like a 1940s BBC radio presenter when his plays were written and we’re proud to be continuing our 30 year mission of liberating these plays from received notions of what’s proper. It was interesting to me that the complainants didn’t mention any of the much more outlandish additions we’ve made - such us badly behaved goats or a Drag Queen fool. Rest assured we will continue to make work by and for everyone and revel in our Yorkshireness!”, Sansom continued.

"Time travels in diverse paces with diverse persons," says Rosalind, the play's protagonist. And Shakespeare's universe of characters is so vast that eminent scholar and critic Harold Bloom credits the Stratford bard not just being the brightest commentator on man's inner workings, but the inventor of them. A typically bombastic claim but one supported by over 700 pages of text that explores how the panopoly of human characteristics are authentically showcased only by the works of this singular force of nature.

Comedian and folk singer Mike Harding weighed in on the debate.

Early Modern English is the language of Shakespeare's time. There have been lots of scholarly efforts to ascertain what the accent of the time really was. To 21st century ears, it approximates a traditional West Country accent.

Original Pronunciation (OP) productions of Shakespeare have famously been put on at London's 'Shakespeare's Globe' on the south bank of the Thames.

For Northern Broadsides' production, the show will indeed go on. They head next to Theatr Clwyd in Wales.

Where there will be no trigger warnings, we are reliably informed.

Locals 'switch to speaking Ukrainian' amid terror of Russian bombing