Russia's invasion of Ukraine continues into its second month with more than ten million Ukrainians displaced from their homes as fighting continues. Thousands of civilians and military personnel have been killed in the fighting, which has left widespread devastation in many parts of Ukraine.

See a summary of Sunday's developments in our blog below. For Monday's latest updates click here.

That's our live blog signing off for Sunday evening.

We'll be back live again at 6am CET Monday morning - or watch Euronews for the latest overnight developments.

Russian and Ukrainian negotiators to meet in Turkey on Monday

Russian and Ukrainian delegations will meet in Turkey on Monday for a new round of face-to-face negotiations, according to David Arakhamia, one of the Ukrainian negotiators.

"During discussions today by videoconference, it was decided to hold the next face-to-face round in Turkey from March 28 to 30," he said on his Facebook page.

A face-to-face Russian-Ukrainian negotiation session had already taken place on March 10 in Turkey, in Antalya, between the foreign ministers, without leading to concrete progress.

The leader of one of the separatist-controlled areas of Donbas said on Sunday that he wants to hold a vote on joining Russia, words that could indicate a shift in Russia's position.

Leonid Pasechnik, the head of the self-proclaimed Luhansk People’s Republic, said it plans to hold a referendum on becoming part of Russia “in the nearest time.”

"The only hope and dream we hold in our heart to become part of the Russian Federation, to return, as they said in Crimea, to the native harbour, and finally start working for one big bright future," he added.

Russia has supported the separatist rebels in Luhansk and neighbouring Donetsk since an insurgency erupted there in 2014, shortly after Moscow annexed the Crimean Peninsula from Ukraine.

In talks with Ukraine so far, Moscow has urged Kyiv to acknowledge the independence of Donetsk and Luhansk.

Intelligence chief: Russia could try to split Ukraine in two

In remarks release by the Ministry of Defence on Sunday, Kyrylo Budanov said that Russian President Vladimir Putin has realised “he can’t swallow the entire country” and would likely try to split the country under “the Korean scenario.” That’s a reference to the decades-old division between North and South Korea.

Budanov said that “the occupiers will try to pull the occupied territories into a single quasi-state structure and pit it against independent Ukraine.”

He pointed to Russian attempts to set up parallel government structures in occupied cities and to bar people from using the Ukrainian currency, the hryvnia.

French President Emmanuel Macron distanced himself from Joe Biden's comments that appeared to hint at 'regime change' in Russia.

At the end of a speech in Warsaw on Saturday, Biden said Vladimir Putin "cannot remain in power" and the White House as well as Secretary of State Antony Blinken have scrambled to clarify those apparently unscripted comments.

In a Sunday interview with France-3 television, Macron said “we should be factual and [...] do everything so that the situation doesn’t get out of control.”

Macron said: “I wouldn’t use those terms, because I continue to speak to President Putin, because what we want to do collectively is that we want to stop the war Russia launched in Ukraine, without waging war and without an escalation.”

President Macron has spoken several times with Vladimir Putin before and during the conflict in an attempt at peacemaking. He is due to speak to the Russian president again either on Sunday or Monday.

Macron stressed that the US remains an important ally, saying, “We share many common values, but those who live next to Russia are the Europeans.”

Read more at our story here.

Pope Francis has stepped up his pleas for negotiations to end the fighting in Ukraine.

Francis told the public in St. Peter’s Square on Sunday that “this cruel and senseless war” continues after more than a month, representing “a defeat for all.”

He lamented that parents are burying their children, and “the powerful decide and the poor die.” Once again, he didn’t cite Russia by name as the aggressor.

Referring to reports that about half of all the children in Ukraine have been displaced by the conflict, Francis said that “war doesn’t just devastate the present but also the future of society.”

The pontiff reiterated his condemnation of war as barbarous and sacrilegious. He said that “humanity must understand that the moment has come to abolish war, to cancel war from the history of man before it cancels man from history.”

A concert arranged at a makeshift shelter in a Kharkiv metro station is like "a ray of hope in this dark kingdom of war", 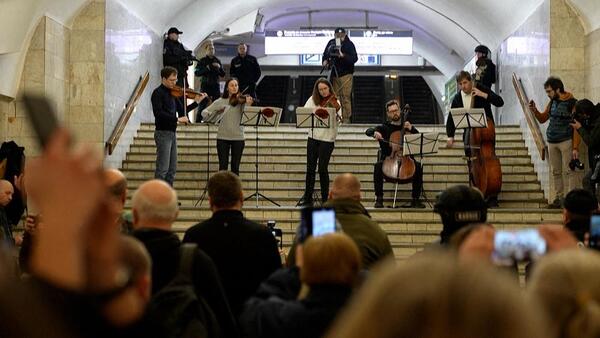 Both the White House and Secretary of State Antony Blink have had to clarify some apparently unscripted remarks President Biden made at the end of a speech in Poland on Saturday, which some people interpreted as calling for 'regime change' in Russia. 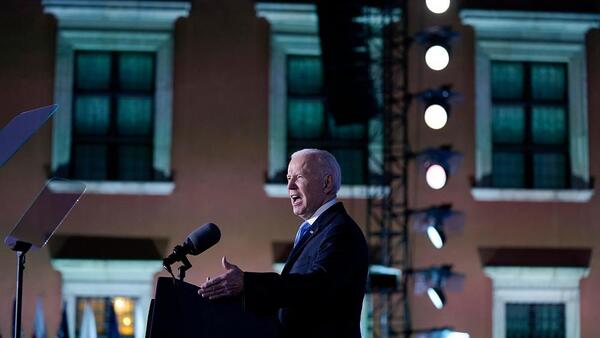 A textil company in France has moved workers from its Kyiv factory to live in Hazebrook in northern France.

While the Ukraine production facility remains open, manufacturing coats, staff who fled to Poland for safety have now got the chance to live in France instead.

"These are people we have known for more than 20 years -- they are employees, collaborators and even friends, so this is an obvious approach" said company CEO Frederic Lener.

Read more, and watch video, in our story here: 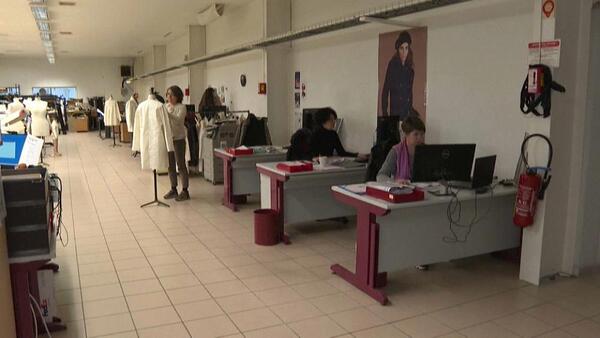 'Solidarity on all levels': French company brings employees from Kyiv